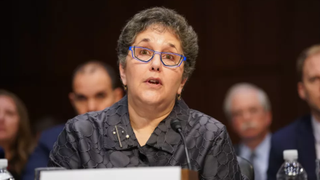 NEW YORK—Emily Barr, president and CEO of Graham Media Group, is B+C’s Broadcaster of the Year, an award she will receive at TVB’s Alt Forward Conference on Thursday, Oct. 1. Barr will be profiled in B+C’s awards issue on Sept. 21. That issue of the magazine also will include recipients of the new B+C Awards.

Barr has led the broadcast TV division of Graham Holdings since 2012. Under her leadership, Graham Media Group was named B+C’s 2016 Station Group of the Year. Previously, she was president and general manager of ABC-owned stations in Chicago and Raleigh-Durham, N.C. Among her individual accolades, Barr received the Golden Mike Award from the Broadcasters Foundation of America in 2018.

Previous recipients of the Broadcaster of the Year award include Hilton Howell of Gray Television (2019), Jack Abernethy of Fox Television Stations (2018) and Jordan Wertlieb of Hearst Television (2017).