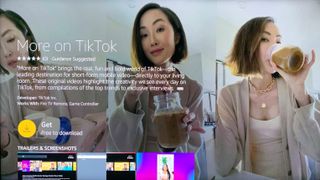 "More on TikTok" features curated video playlists and compilations from the mobile TikTok app, as well as interviews with creators, along with other content that runs over the one-minute limit on the phone app.

The app is a view-only channel, so users won’t need to log in, and it won’t enable them to upload videos.

More on TikTok will be free at launch and will not carry advertising. It is currently only available in the United States.

The launch comes as President Donald Trump signed an executive order stating TikTok is a threat to national security and U.S. companies must cut all ties with the Chinese company by Sept. 15.

TikTok released a statement regarding the president's order, claiming that it was issued without "any due process" or paying attention to facts, as the company says it has tried to work with the administration for the last year.

"This Executive Order risks undermining global businesses' trust in the United States' commitment to the rule of law, which has served as a magnet for investment and spurred decades of American economic growth," the statement read. "And it sets a dangerous precedent for the concept of free expression and open markets. We will pursue all remedies available to us in order to ensure that the rule of law is not discarded and that our company and our users are treated fairly – if not by the Administration, then by the US courts."