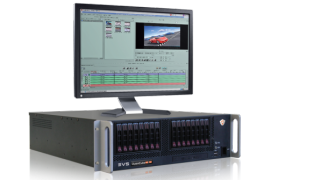 Viacom has upgraded its media management workflow with the latest version of the EVS OpenCubeHD/SD MXF ingest server. The investment will help Viacom to fully digitize and streamline its file-based media production and archive workflows, and open up new content management and potential monetization streams.

The investment builds on Viacom’s existing EVS OpenCube digital media archiving workflow. Launched at IBC2013, the new version of the EVS OpenCubeHD/SD server enables Viacom to manage the transport of closed captions and subtitles in its MXF file-based production and archive workflows by generating *.SCC/*.MCC files and S436M tracks at ingest.

Viacom, which supports U.S.-based channels such as MTV, VH1, Nickelodeon and Comedy Central, has been using EVS OpenCube servers since 2007, when it invested in a number of OpenCube HD servers for MXF archive digitization.

The EVS OpenCube server supports dual independent HD/SD channels while autosensing enables one channel to be SD and the other HD. It provides SMPTE standards-based MXF generation, including MXF AVC-I, for maximum interoperability with third-party systems, as well as native support for other codecs including MOV and ProRes. Directly attached to networked storage, it can be used to perform quality control functions in conjunction with XFReader, as well as generating proxies during ingest.