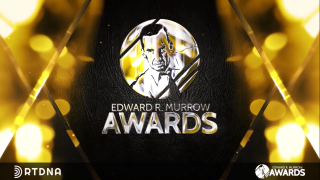 Recognizing excellence in broadcast and electronic journalism, The Murrow Awards handed out more than 100 national awards and more than 800 regional awards for digital, network, students and, new this year, podcasts.

There were eight Overall Excellence Awards presented in eight categories:

“We know that this year has been extraordinarily tough,” said Dan Shelley, RTDNA executive director, in his opening remarks. “2020 has brought about challenges that have tested us at every level of our professionalism and humanity and I couldn’t be more proud that you are always there, covering it all. That you—despite the previously unthinkable professional and personal challenges you’ve faced—are continuing to serve your communities with distinction and dignity and professionalism.”