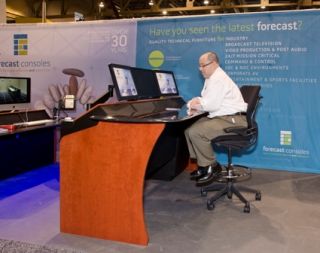 Video displays and other television equipment have been part of a changing landscape during the past few years. Video monitors are no longer deep and heavy and universally mount in 19-inch racks. Ditto the myriad control panels with rows of buttons, switches and knobs. Now it’s all about computer screens, keyboards and mouses. Control room furniture has been changing to accommodate these innovations and several manufacturers were on hand at the 2012 NAB Show to introduce some new wrinkles.

Ernesto D'Angelo relaxes at the new client console by Forecast Consoles.Creative Dimensions showcased its VERSA Broadcast Desks, which are highly customizable, lightweight, portable remote broadcast desks that assemble easily without the use of tools. Each desk is interchangeable from a one to four person configuration, and comes with its own shipping container.

Forecast Consoles used the NAB Show as a backdrop to introduce its Production Series PCC-SH furniture line. The PCC-SH designation translates to “producer-client console standing height” and is just that—elevated console work surfaces that allow control room personnel to work in a standing position without the need to bring in a carpenter to construct risers on site. The PCC-SH models feature work surface heights of 38 to 42-inches above floor.

TBC Consoles featured its Trac console series, showing the latest in the SmartTrac product line, which included a height-adjustable base, allowing allows operators to either sit or stand. Other features include removable and interchangeable equipment turrets, an integrated system for managing interconnecting cables that provides both front and rear access, and a rear device “trac” that accommodates the mounting of monitors, loud speakers, and other control room necessities.