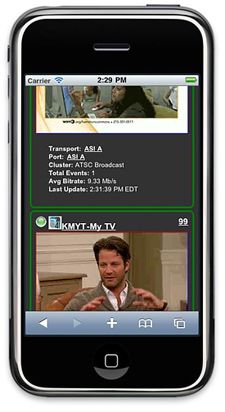 PRINCETON, N.J.: Triveni Digital announced that CTV, Canada’s largest private broadcaster, has standardized on Triveni Digital solutions across all of its stations for metadata generation and management, as well as for multilayer monitoring and analysis of DTV streams. The network is using the GuideBuilder metadata platform at its Calgary and Toronto facilities to provide nationwide centralcasting of Program and System Information Protocol data, and it has deployed StreamScope RM-40 remote DTV transport stream monitors for CTV stations across Canada.

“Since rolling them out across our broadcast stations, the StreamScope RM-40 systems have enabled us to realize efficient real-time DTV monitoring throughout our broadcast operations and, in turn, accelerate the isolation and repair of transport stream issues,” said Yul Lem, senior director of transmission engineering at CTV.

Developed with an open system approach, GuideBuilder serves as a high-performance PSIP bit-stream generator that can be integrated with, and import program data from, a wide variety of traffic systems, automation systems, and commercial listing services. The system offers the tools necessary to edit and manage multiple channels and create detailed service descriptions for robust and informative electronic program guides.

GuideBuilder is built on client-server architecture and equipped with fault-tolerant features, including the ability to send out data from an internal carousel in a multiplexer. This capability allows the multiplexer to continue sending data if the GuideBuilder unit is disconnected. Within its centralcasting model, CTV installed primary and secondary GuideBuilder systems in redundant configurations to add further resiliency to its broadcast operations.