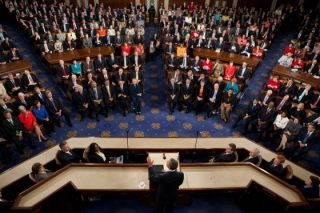 “The plan includes reallocating the D Block for public safety--costing $3 billion--and $7 billion to support the deployment of this network and technological development to tailor the network to meet public safety requirements,” the White House fact sheet states. “In addition, freeing up spectrum from the private sector through voluntary incentive auctions... would raise money to pay for these investments in public safety and also reduce the deficit.”

A footnote indicates that the White House expects a net gain of $18 billion from incentive auctions after covering the estimated $10 billion cost of the public safety network.

The Rockefeller-Hutchison legislation, S.911, provides that no full-power TV licensee would be forced to give up spectrum for an incentive auction, but that those who do would receive a portion of the proceeds. At the same time, according to Lee Petro of Fletcher, Heald & Hildreth in Washington, language in the bill gives federal regulators the authority to move broadcasters, with unspecified reimbursements coming out of the proceeds.

The Congressional Budget Office estimated that incentive TV spectrum auctions would generation $24.5 billion, but conceded that it was “difficult to predict how much spectrum would be auctioned by 2021 because of the time and cost involved in moving existing users.

“For example, the amounts auctioned as a result of incentive auctions would depend on the willingness of two satellite licensees and dozens of television broadcasters to sell their existing spectrum rights at a price that is below the market value of their licenses... Past experience suggests that relocating federal and commercial users can be very costly and take many years to complete.”

The National Broadband Plan calls for redesignating 40 percent of the spectrum now licensed to TV stations. The Administration via the FCC is pushing nationwide wireless broadband as a component for jump-starting the economy through job creation. The mechanics of such a redesignation remain a mystery in part because no broadcasters have indicated their intent to give up spectrum. The industry’s lobby, the National Association of Broadcasters, has said that taking 40 percent of the TV spectrum will knock around 210 full-power TV stations off the air, and force another 672 to move to different channel assignments. Only 174 stations moved to new channel assignments in the June 2009 digital transition. The FCC has yet to provide its model for how broadcasting and TV reception would be affected by the planned redesignation.