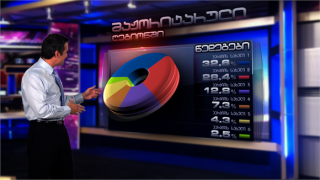 Rustavi2 enhanced its news set with an assortment of augmented reality graphics, including the new Parliament building in Kutaisi. A 3D model of the Parliament building was used in the elections logo, all backgrounds, and in the news intro and promo. Orad 3DPlay was used to control important on-air election visuals, including tickers, graphs, charts and other critical election data pulled from the central election database. The color and material coordination made the virtual graphics look natural in the studio. The show itself was orchestrated in a triangle: the anchor, the interactive video wall and the talent interfacing with the augmented reality graphics, making the graphics a truly integral part of the show.

Deployed within several days, the Orad installation allowed Rustavi2 to transfer the data from its control center via fiber optics to its studio located several kilometers away.