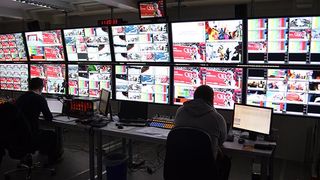 At Schladming, sono Studiotechnik facilitated all IBC operations for the Championships including a production gallery capable of controlling daily live transmissions from the tournament and also coverage of the daily press conference which was broadcast by multiple international TV stations.

The mobile production facility, which has been designed and constructed by a team of sono Studiotechnik engineers working closely with Harris Broadcast product and technology specialists, integrates numerous Harris production components. At the heart of the system is a Harris Broadcast Platinum router with 11 integrated HView SX Pro multiviewers, which are used extensively across displays within the facility. Harris Broadcast signal processing and interfacing equipment include the Selenio media convergence platform and 6800+ modular core processing devices.

A critical consideration for sono Studiotechnik in the design stages was how to design the most sophisticated production facility within the most compact unit. The ability to combine advanced multiviewers within the Platinum router helped in this respect, allowing sono Studiotechnik to build compact containers and flyaway units for live production with routing and monitoring in one single frame instead of multiple frames requiring significant external wiring, more space and power.