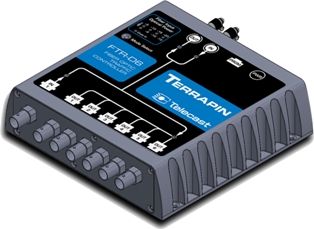 AMSTERDAM—Telecast Fiber Systems will debut Thunder, a cost-effective, compact and versatile fiber optic solution for transporting broadcast signals, at IBC2012, Sept. 7-11 at the RAI in Amsterdam.

For OB, broadcast, infrastructure, and live sound applications, Thunder requires only one or two strands of fiber to transport up to 80 bi-directional channels of audio, data, and/or intercom signals, configurable in up to 10 eight-channel blocks. Rows of 16 XLR and DB9 connectors can be also added to provide traditional audio, intercom and data interfaces when those connectors are preferred. In addition, the system can be equipped with a portable, throwdown "Stage Box" offering 32 analog inputs, eight analog outputs and two intercom channels in a hardened, ruggedized enclosure.

The Belden-owned company will also mark the European debut of several products, including the Terrapin TR-D6 3Gb/s HD/SDI Video Transceiver and Distribution Amplifier, a compact bidirectional throwdown device that features both a fiber optic (ST) input and a copper (BNC) input, as well as a fiber optic output (ST) and six copper (BNC) outputs. A single push-button operation allows the user to easily switch between four modes, permitting the Terrapin TR-D6 to act as an HD/SDI distribution amplifier with six BNC outputs and a fiber optic output, a fiber optic transceiver with six BNC outputs of the received signal or the local copper signal, or as an optical repeater with a six-output BNC tap.

Telecast will also showcase Cobra 2 DT, a fiber optic solution that extends the range of the industry's new digital triax-based camera chains using simple, inexpensive fiber optic cable. The Cobra 2 DT system extends Sony's new high-definition triax camera chains, such as the HXC-100K and HSC-300K, to enable their use over durable, lightweight tactical fiber or within an installed fiber optic infrastructure. Cameras can now be separated from their CCUs and be located around a building, across a campus, or even 20 km across town using metropolitan "dark fiber." Using Telecast's TelePort systems, several digital triax cameras can be "muxed" over a long distance onto a pair of fibers, all at the lowest pricing the company has ever been able to offer for triax-to-fiber technology.