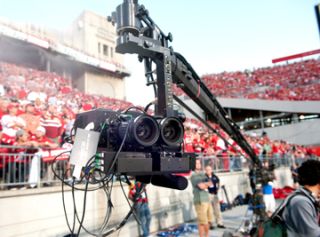 SAN DIEGO, CALIF.: Sony is extending its sponsorship of ESPN 3D for another year. The Japanese electronics giant emphasized its 3D productions of the upcoming Summer X Games, and the regular college football season commencing this fall. Sony was named the first official sponsor of the network when it was announced in January 2010. The network launched June 11, 2010 and transitioned to a 24/7 network on Feb. 14, 2011.

“We’re doubling the number of college football games on the network this fall, which was made possible by our strategic relationship with Sony,” said Ed Erhardt, president of ESPN Customer Marketing and Sales.

As of today, ESPN 3D produced more than 115 live sporting events. When the network was announced at the January 2010 Consumer Electronics Show in Las Vegas, the goal was to do at least 85 live sporting events in 3D during the first year. It was launched with the commencement of the 2010 FIFA World Cup soccer championship games.

While ESPN and Sony are bullish on 3DTV, the jury’s still out. First-year set sales was just 1.1 million in the United States, though 3DTV sets did not become available until March of 2010. This year’s number is expected to hit 1.9 million. That’s still a fraction of ESPN 3D’s footprint, which covers 65 million households.

Recent research from the United Kingdom on 3D reveals conflicts. 3DTV penetration is expected to grow, but 3DTV usage for viewing stereoscopic content is not.

Futuresource Consulting recently said nearly 40 percent of European homes would have a 3DTV by 2015. Informa Telecoms & Media said about one-third of U.K. households would have a 3DTV set by 2016, but that fewer than half would be watching 3D content on them, compared to 90 percent in 2010. Both market researchers noted that content was the ringer.

Here’s Jim Bottoms of Futuresource:
“Whether consumers use the feature or not, they will be buying it by default, as the technology will increasingly be incorporated in many of the sets in manufacturers' product ranges. And where previously there was little 3D content available, the growth and acceptance of 3D is now being driven by the broadcasters. Going forward, the increased availability of 3D content will encourage viewers to engage with and evaluate 3D offerings.”

And here’s Adam Thomas of Informa:
“We do not share the view that 3D represents the obvious next evolutionary step for TV, in the same way that color followed black and white, or HD is following SD. A case can be made that color and HD offer noticeable enhancements to the technologies that preceded them. But 3DTV is less of an enhancement and rather more a new type of viewing experience--one that many people will enjoy, but some way from becoming ubiquitous.”

ESPN has a different take. Bryan Burns is the franchises chief evangelist. “It’s just a matter of time before 3DTV truly catches on,” he recently told TV Technology. “And that time is coming sooner than you think.”

Sony, in the meantime, is pushing 3D through a new initiative it’s calling “3D Experience,” in which stereoscopic content is streamed to 3D-capable Sony Bravia sets, and eventually, to Blu-ray players. The campaign was announced by Sony Europe. Content will be free of charge and on-demand. The program is launching today in the United Kingdom, Germany, France the United States and Canada.