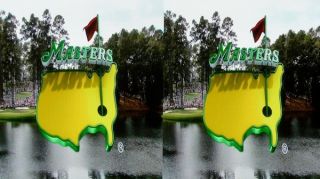 BRISTOL, CONN. and LONDON: ESPN will once again present the Masters Golf Tournament in 3D, and the U.K.'s Sky Sports will carry the event stereoscopically for the first time.

The Entertainment and Sports Programming Network helped produce the Masters in 3D last year, inaugurating golf into the world of stereoscopic TV. The even marked Tiger Woods’ comeback after a car crash that led to revelations of his philandering. Phil Mickelson won; Tiger Woods tied for fourth. Both golfers are on the invite list for the 2011 Masters. Woods is having a rocky season, having just lost in the first round of the Accenture Match Play Championship in Tucson yesterday. Mickelson won his round. That tourney runs through Sunday. Golf Channel is carrying daily coverage; NBC will air the weekend action.

The Masters was almost the first live sporting event produced and distributed to U.S. homes live in 3D, but Cablevision jumped in ahead of it with 3D coverage of a National League Hockey game. Comcast and Cox carried the Masters in 3D last year, each on a dedicated channel, as ESPN 3D didn’t launch until mid-June 2010. ESPN did shoot and produce the event using Sony cameras and a truck from NEP. Both will be redeployed for this year’s event.

ESPN the franchise will carry multiplatform coverage of the Masters with 4.5 hours per day of first- and second-round play on ESPN, ESPN HD and ESPN Deportes on Thursday and Friday, “SportsCenter” at the Masters and live coverage of the Par 3 Contest on Wednesday, plus coverage on ESPN.com and a special 43-hour Masters tribute on ESPN Classic.

Sky Sports will distribute the Masters live in 3D throughout the United Kingdom, according to August National Golf Club and Masters Tournament Chairman Billy Payne. This year’s tourney will mark the satellite TV provider’s first live coverage of the event. Sky Sports will televise Wednesday’s Par 3 Contest and the subsequent four rounds live. The BBC has carried live coverage since 1986, and will air the weekend action.

The Masters has been broadcast by CBS every year since 1956, with ESPN carrying early round coverage since 2008. The tournament became the first golf event carried live in high definition in 1993. CBS coverage begins this year with first- and second-round highlights Thursday and Friday, April 7 and 8 at 11:35 p.m. ET. The network will carry third-round coverage on Saturday, April 9 from 3 to 7 p.m. ET; and final-round coverage on Sunday, April 10 from 2 to 7 p.m. ET.