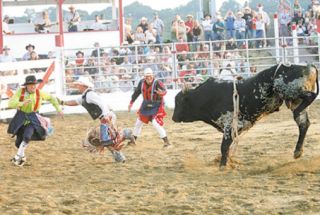 CULVER CITY, CALIF: Another round of programming has been announced for the 3D channel slated by Sony, Discovery and IMAX for a 2011 launch. Six new titles have been added to the line-up. All will be natively produced in 3D.

Four new series were announced. “Bullproof” is the working title about a series focused on bull-riding and the guys who dress up like clowns to distract the beasts when riders are down. It will be produced by Wild Eyes Productions and Digital Revolution Studios.

“Making the Brand,” working title No. 3, will bring the stereoscopic view to the production of goods, from hand-made crafts to mechanized mass-produced products. Produced by Electric Sky Productions.

Sony, Discovery and IMAX previously announced a programming line-up that included the likes of “Attack of the Giant Jellyfish,” “Cloudy with a Chance of Meatballs,” and “Africa in 3D” among others.

Sony, Discovery and IMAX announced their 3D joint venture in January. Discovery agreed to provide the network, sales and technical support as well as 3D rights to its content and promotion. Sony is contributing advertising, corporate sponsorship and 3D rights to film and music content. IMAX is also providing licensing for future 3D films and patented image technology.