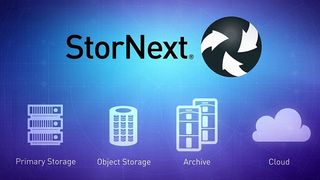 The new version allows clients to write files into the StorNext file system and then, based on policy, the file system copies files to public or private cloud storage and offers the option of including additional object metadata. Doing so enables non-StorNext software clients and cloud processes to access objects directly by leveraging the new extended metadata, the company said.

"Quantum's StorNext file system has been widely adopted by the media and entertainment industry because of the way it maximizes performance for flash-based drives, high-resolution workflows and multiple workstreams," said Tom Coughlin, president, Coughlin Associates. "By making hybrid and multicloud storage environments more accessible, the StorNext file system continues to evolve as a tool for enabling media and entertainment workflows."

StorNext 6.4 also offers improved retrieval speed from large object stores, the company said. Users can expect to see a 5x to 7x performance increase depending on the size of their objects and other factors.

“This latest version of StorNext software adds new ways to archive content and access it in the cloud and is another step toward providing a seamless bridge between on-premise and the cloud," said Ed Fiore, vice president and general manager, Primary Storage at Quantum.