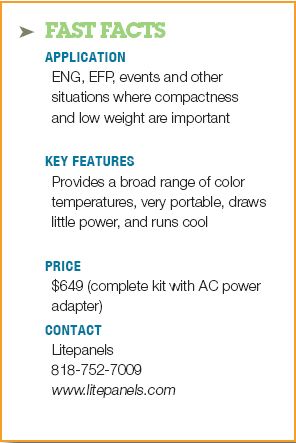 LEDs have changed the lighting landscape in many ways—from hot to cool, and from tungsten to daylight temperatures. While LEDs are available in various color temperatures including 3200 degree K and 5000 degree K range, filters are necessary to change the color temperature to the appropriate level. Deploying such filters can be fairly fast and easy in some cases, but can also slow down the shoot in other instances, especially if the filter or filter holder is misplaced. This is especially true when shooting handheld with varied ambient lighting sources, and in run-and-gun situations. In response, lighting companies have developed bicolor LED lights, which can provide multicolor lighting.

FEATURES
Litepanels’ new Croma product is a prime example of a camera-mounted LED light that’s designed to adapt quickly to a variable and changing lighting environment.

The unit is a compact and lightweight LED lighting instrument designed primarily for camera-top use. It has both daylight and tungsten LEDs that can be deployed separately or blended together to achieve color temperatures between 3200 and 5000 degrees K. This is ideal for on-therun applications, including news and reality TV where lighting environments can change quickly and where there’s little time to locate and add color temperature filters between scenes and shots.

Croma offers a complete close-range lighting system with either tungsten, daylight, or any temperature of light in between. This is all achievable at the flick of a wrist, with the variable color temperature integrated along with a dimming system that smoothly adjusts between zero and 100 percent output. And the light provided is purportedly flicker-free at any frame rate, shutter speed or shutter angle.

Croma breaks away from the boxy-style camera lights that characterize many similar units with a smoothly contoured chassis that’s rubberized for easier handling and absorption of mild bumps and knocks. This also makes it cooler to the touch. The unit accepts a variety of universal accessory mounts for attaching to cameras that are equipped with a standard shoe-mount. The mount supplied with the Croma fastens securely to its threaded base via a thumbscrew that snugs quickly, but allows swiveling through a range of at least 45 degrees vertically and 360 degrees, horizontally. The unit can also be easily mounted on a standard light stand via its threaded base to provide key, fill or back light. It can also serve as an on-camera “eyelight.”

The instrument is powered by six AA cells, which provide up to 1.5 hours of continuous operation. The power requirement is stated as 9 Watts, with the light output comparable to a traditional fixture consuming between 40 and 90 Watts. The Croma’s LEDs purportedly have a lifespan of up to 50,000 hours in periodic use. The device has also been approved for use with Anton/Bauer’s Dionic HC battery and DTap power system.

The Litepanels Croma mounted atop a DSLR

IN USE
I first tested the Croma in shooting a series of interviews at a convention, pairing it with a Canon 5D Mark II. I mounted the Croma on the 5D via the mounting post provided, which included a swivel head. This enabled me to use it as a key light by angling the unit down on the subject. I could also slightly angle it off to either side if more of a side-lighted look was needed. This enabled me to make better use of existing light for fill or back lighting. The ability to dial in virtually any color temperature opened up new avenues for working with most types of ambient lighting between 3000 and 5500 degrees K, including mixed sources.

The Croma has two knobs on its left side as you face the back panel. The larger, lower one is the on/off and dimmer control, and the smaller knob above it is the color temp adjustment. The different knob sizes made it easy to make adjustments without fumbling or guessing while shooting.

I quickly got in the habit of tweaking the color temperature to match the prevailing light between shots, and even during shooting by monitoring changes in real time on the LCD screen. For me, this turned the issue of achieving correct color balance on its head, as it enabled me to simply dial in the preferred color temperature while eyeballing the results on a monitor. I found that the Croma has enough output to override prevailing color balance when you’re shooting at fairly close range.

In such situations, the Croma can be a powerful tool for creating a desired “look” for a given close-up shot. I found that I could achieve a constant “look” despite shooting in a range of hybrid ENG/EFP situations.

The Croma was up to the challenge, including interviews done on the fly, especially those at a close range of four feet or less. In such cases there was no need to match the Croma’s color temperature color with that of existing light.

In such applications, I found myself selecting a mid-range color temperature—in the mid-4000s—to achieve a “warm look.” I did this by eye, based on aesthetics— not via color temp meter readings—and achieved pretty good results.

Certainly, you can get consistent results with adequate lighting with a traditional mono-temperature camera light, especially at close range. With conventional lights, what you can’t do as readily though, is tweak color to match existing lighting or to achieve a specific look. For fast-paced shooting at close range I found it difficult to beat the Croma.

The main problems that I experienced with the unit centered on power. I burned through my fi rst set of standard AAs in what seemed to be a fairly short time. Unfortunately, I wasn’t able to try out the unit with any cameras with a D-Tap option. I did remedy the relatively short battery life by alternating with the provided AC adapter in situations where camera mobility wasn’t critical.

SUMMARY
Litepanel’s Croma solves a basic technological challenge of shooting in an urban landscape awash with light of varying color temperatures, as it matches to them. This feature also facilitates creativity by enabling the shooter to tweak the prevailing color temperature based on aesthetic considerations.

The instrument is aesthetically designed and rugged enough to withstand the modest abuse associated with professional use. It’s also well-suited to meet the challenge involved in making the best use of existing lighting conditions and it allows the shooter to achieve the desired “look” in a media landscape where this is important. The Croma’s ability to provide varying color temperatures makes it a much more valuable tool than a standard lighting fixture. Shooters who find themselves in run-and-gun situations and who also want to achieve special “looks” should consider adding this light to their toolkit.

Carl Mrozek operates Eagle Eye Media and specializes in wildlife and outdoor subjects. He may be contacted ateagleye11@ gmail.com.