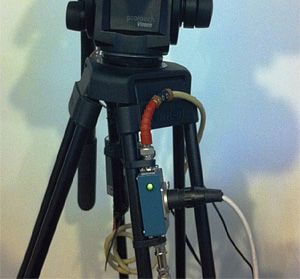 As video cameras get lighter and smaller—all the way down to the video-enabled DSLRs—new power and lighting options to serve those cameras are being developed and these will be shown at NAB.

Anton/Bauer will feature its Dionic HCX high current battery, with its 120 Watt-hour capacity and a motion detection sensor that protects against capacity loss. The motion detection system significantly increases the overall life of the battery by mitigating the lithium-ion battery self-discharge that can occur when the battery is not in use. The battery also features a LCD real-time fuel gauge. Also look for the new Tandem 150 modular power system, a small and lightweight charger and on-camera power supply that provides flexibility in powering a camera and other devices at any location. For shoots in isolated areas, the Tandem 150 provides two unique methods to charge any Logic Series batteries—charging from vehicle DC power supplies, or from 110 or 220 Volt AC sources.

IDX System Technology will feature its E-HL9 88 Watt-hour lithium ion V-Mount high load battery pack designed to meet the demands of power-hungry HD gear. It can support sustained high current loads of up to 10 Amps. Standard IDX features such as PowerLink, Digi-View, and Battery Management System (BMS) are also built into the E-HL9 series. PowerLink connects two E-HL9 batteries for a total power capacity of 176 Watt-hours. Digi-View allows reading battery levels in many of today’s camera viewfinders. BMS can be used for enhanced diagnostics and a comprehensive review of the battery’s history of use.

PAG L95eR Battery for RED ONEPAG will showcase its new PAG RMC4X rack-mountable intelligent charger that can simultaneously charge four PAG, Sony, or IDX lithum ion batteries. Also look for the L95eR Battery, a low-cost Lithium ion battery designed specifically for use with the RED One digital cinema camera. The L95eR provides capacity information in the RED One viewfinder, and has a capacity of 6.5Amp-hours (95 Watt-hours), and has a rated maximum continuous output of 7 Amps. It will power a RED ONE camera for approximately 1.25 hours. PAG’s 0553V dual battery mount allows a pair of L95eR batteries to be combined, to provide extended run-time and a higher current-draw capability. PAG will display its products in the Manios Digital booth.

Arri will introduce two new models in its ArriLite range, the D lighting fixtures. They represent the next generation of traditional, open-faced lights. The previous 750 and 2000 units have been completely redesigned, offering a modern take on a well-established lighting concept. With improved functionality and simplified maintenance, they fit into the demanding production environments of today’s film and television industries. Despite being compact and lightweight, the new ArriLites are rugged and durable.

ArriLite 750 Plus and 2000 PlusAutocue/QTV will debut its LED and softbox lighting kits. The dimmable 1000 and 500 LED lights and stands can be used in multiple combinations. For softer lighting, there’s also a three-head softbox lighting kit with 12 fluorescent bulbs. Also being introduced is an on-camera 120 LED light, designed for mobile shoots.

Frezzi will feature its Mini-Fill portable lighting fixture. In addition to its previously available interchangeable tungsten and HMI modules, Frezzi has now added LED capability to the fixture. The lamp modules can be quickly changed to allow videographers to simply change the bulb as they move from one color-temperature environment to another. With the LED light source, there’s unlimited dimming without any change in color temperature. With the Mini-Fill fixture, owners can be sure that when the next generation of light sources come along, they too will be able to be plugged directly in.

ikan will debut its iLED One on-camera LED light, designed for video cameras, including DSLRs. It uses a single, interchangeable LED bulb that provides a small, lightweight and durable portable lighting fixture. Daylight and tungsten color balance LED bulbs may be swapped, as well as bulbs for flood (60 degree) or spot (40 degree) coverage. Available accessories for the iLED One include the AC107 battery plate, and BCA107 belt clip. Adapters are available to allow use of a variety of small camcorder batteries.

K5600 will feature its Joker News 200 and Joker News 400 daylight balance fixtures, which can be quickly converted from a focusable light fixture to an omnidirectional source. They’re designed specifically for the fast pace and quick set ups of news coverage. The ultra fast re-strike lamp starter assures quiet and immediate lamp ignition and re-ignition. These News fixtures share the qualities of K5600’s Joker-bug system, providing two fixtures in one: an omni-directional fixture and a directional focus-able open face flood lamp. Focusing of the parabolic reflector changes the beam pattern from Spot to Flood in a three to one ratio, achieving beam angles from 16 to 45 degrees. When used without optics, the Joker News becomes a Bug-Lite—an open source designed to fill evenly a Lightbank or a Lantern making it perfect for interviews.

Kino Flo Lighting Systems will introduce its Tegra 4Bank, the company’s first true hybrid that combines the features of the 4Bank portable softlight system with new studio-rated, power-factored electronics. The Tegra 4Bank combines the versatility of the 4-foot 4Bank portable system with onboard control features similar to the company’s Diva-Lite 400 video light. The Tegra 4Bank is the only fixture in its class that comes complete with on-board controls and also remote handheld dimming.

Litepanels Sola 6Litepanels will unveil a pair of LED Fresnel fixtures that combine the advantages of the traditional Fresnel light fixture design—including precise controllability—and focusing, with features of LED illumination such as low power consumption and no noticeable heat generation, along with full dimming from 100 to zero percent with no noticeable color shift, and long bulb life. The Sola 6 (with six-inch Fresnel lens) is designed for studio and EFP work. The Sola ENG (with three-inch Fresnel lens) is designed for on-camera field work and for use in studios where a small fixture with Fresnel properties is needed.

Lowel-Light will introduce its new Rifa eXtra Flo Kits. Each Kit features the Rifa eX that sets up in 60 seconds and provides a soft light. The kit offers three quick eXchange lamp head choices for flexibility, including high and low wattage tungsten-halogen for the indoor, and a hi-CRI day flo-lamp option for daylight applications. A three-socket lamp head allows three bulbs to be used for increased illumination.

The company will also show its Lowel Blender compact LED that makes it easy for a pro or amateur to mix daylight and tungsten to match the ambient light of their location. With Blender the single fixture can be adjusted to match just the color temperature that ambient light is providing in a scene, including fluorescent light.

Photon Beard will unveil a new lighting technology called Nova Spot. The highly efficient light source is touted to be more energy efficient than HMI or LED technology. The Nova Spot fixture produces a similar amount of light as that from a 2,000 Watt tungsten Fresnel, but consumes only 273 Watts. It can be powered from AC or battery sources. The Nova Spot is focusable from 12 to 15 degrees and is daylight color balanced with a near continuous spectrum. The company will also showcase its Wi Light, a new, low-cost wireless control system for studio lighting that promises to simplify setup. Wi Light is designed to reduce, or in some cases eliminate, the need for traditional wired DMX-controlled systems. It can be used to control a mixture of fluorescent and incandescent lighting systems.

Videssence will introduce its Softkey LED fixtures for video conferencing. The Softkey SK025 and SK050 adjustable fixtures provide controlled aiming for key or fill lighting for video- and teleconferencing in multi-use spaces. The 12x12-inch recessed or surface mount housing shrouds an adjustable fixture that is tension-held and rotates through 359 degrees and can tilt through 130 degrees. Fixtures are supplied standard with gel frames and a spread lens gel. The company will also showcase its ExceLED 25 LED Key Light, a powerful LED in a small, compact, low heat package. This 25 Watt LED fixture measures a mere 9.6 x 9.2 x 4.5-inches and is designed for broadcast or studio general accenting, key lighting or back lighting.

Zylight IS3 Intelligent LE D Light
Zylight will feature its Active Diffusion, a thin, flexible panel that attaches to a standard diffusion frame and is electronically controlled. Diffusion produced by the panel can be precisely adjusted across a range of densities, eliminating the need to switch sheets of diffusion gel material. The company will also feature its IS3 Intelligent LED Light, which provides for a fully adjustable color temperature between 2500 and 10000 K, adjustable green color correction, full color output with separate hue and saturation control, and a user interface for precise control of functionality. The light can be controlled via DMX and wireless control and features a rugged construction.