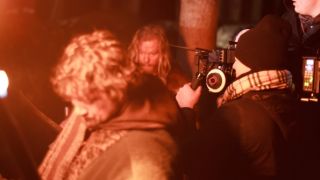 DP Sebastian Wiegärtner had exactly three days to shoot the demo film “Tumulus,” which left no leeway for experimentation. To be sure he would deliver the project on schedule, he equipped his Sony PMW-F3 with professional camera accessories by OConnor, part of Vitec Videocom, a Vitec Group company. For this critical project, he selected the O-Box WM Mattebox together with the O-Grips handgrips and the new O-Focus DM Follow Focus with Glow-in-the-dark Marking Disks.

Considering the tight schedule, the requirements were demanding. The performance of three new Super Speed Lenses by Carl Zeiss were to be impressively presented with cinematic, scenic images. Wiegärtner had a week for preparation, which included the script, casting the actors, location scouting and, of course, equipment selection.

They mainly shot at night in a legendary Swiss forest. Light flares were to be avoided. For this reason alone, the O-Box WM mattebox was indispensable. In some scenes, Wiegärtner had to follow the actors through gorges and the thick forest with the rig on his shoulder. Robust equipment was, therefore, a basic requirement for a smooth shoot.

The new lenses were fixed focal length lenses, so frequent lens changes were necessary. Because the O-Grips can be directly mounted on the O-Box WM, he only had to remove the mattebox together with the O-Grips when changing lenses.

He also worked with the new O-Focus DM Cine Set. The glow-in-the-dark marking disks for the O-Focus DM also proved to be practical for the many night shoots. A flashlight was unnecessary because the marking disks glowed throughout the entire night.