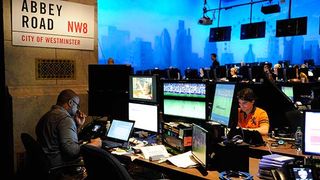 Many are calling this year’s U.S. Olympics coverage by NBC the highest rated and most extensive (in terms of reach) in history. Darryl Jefferson would certainly agree, although he might add the phrase “physically and mentally taxing.”

For him, as director of post-production operations for NBC’s “Highlights Factory,” it’s been an all-encompassing endeavor that has seen him act more like an orchestra conductor than content creation supervisor. Matching the network’s massive 5500 hours of content with an unknown amount of highlights suitable for all digital delivery platforms is daunting, but he’s taking it all in stride — at least from the highlights development side for everything not appearing on TV.

From his single multi-screen workstation in New York City, Jefferson oversees teams of editors, producers and camera crews in New York, London, Connecticut and Florida. Since the Olympics began (and well before), he has spent 16-hour days keeping the Highlights Factory — or “the off-tube factory,” as the team affectionately calls it — team operating smoothly.

Often exhausted, Jefferson said he “remembers a 26-hour day, but is not really sure how we got through that.” When there’s a fire to put out — like when the coverage of a live event suddenly switches to an unexpected commercial, or a late-breaking sports score needs to get reported immediately — he’s the guy to do it.

Serving the digital domain
The entire highlights team (about 170 people in NYC alone serving the disparate yet inherently linked digital platforms) typically works 22 hours per day, in three shifts, to make sure consumers are getting all of the timely highlights they require on their TV, cell phone, tablet and computers. Within hours of a live event, a short clip is logged, edited and packaged into a "highlight" for download to millions of cable set-top boxes or accessed on the www.nbcolympics.com website. This is happening hundreds of times per day.

A team of interns and producers monitor 35 concurrent sporting events to mine the best highlight clips.

Indeed, to make sense of the 35 concurrent events that were being monitored at any one time, they are using an Avid Interplay MAM system. Highlights production teams use it to quickly select, edit and prepare packages for distribution to all of the various media outlets. It’s the same system used for the 2008 Olympics In Beijing, China.

This multi-level infrastructure involved a total of 550TB of Avid Isis storage, when you factor in the International Broadcast Center (IBC) facilities in London, the NBC News facility in New York and the Highlights Factory at 30 Rockefeller Plaza (all employing Avid Interplay Deliver software for the high-speed transfer of audio and video clips to the other NBC News locations in NY, DC, LA and Miami).

According to David Frasco, director of Network Accounts for Avid, HD nonlinear edit suites in London’s IBC are outfitted with seven Avid Symphony and 26 Media Composer systems for high-end editing and 5.1 surround sound. These systems are connected to the Avid ISIS shared storage and Avid Interplay production asset management systems. (Users are able to quickly browse the Interplay MAM proxy and transfer material faster than real-time for use in Symphony and Media Composer editing software applications.) In addition, Avid AirSpeed 5000 servers are used in conjunction with an ISIS 7000 system to create turnkey production islands at the Olympic venues, including gymnastics, swimming, diving, and track and field.

A watershed moment for TV
“This Olympics has been a real watershed moment for live sports production,” said Jefferson, who is completing work on his third Olympics. “The fact that I can look in on and control operations in London, Connecticut and Miami from my desk in New York is really powerful. I can trigger a record feed from anywhere we are situated and have it on my desktop in a matter of seconds.”

He’s talking about managing 50 simultaneous live feeds coming in from London, eight in New York and several others that are being used for archiving content (in Connecticut and Florida) and parsing them out to NBC’s various locations.

Metadata makes the magic
The technology infrastructure allows for digital ad insertion that has been targeted to different regions of the country (and different sporting events). Each new media platform has its own set of metadata, which must be logged correctly or the proper clips will not show up where it’s supposed to. An editor or producer can simply call up an event and have access to all of the live and previously recorded elements generated from that venue.

A virtual army of interns in New York used the Interplay MAM archiving module to view proxies, add logging notes, select shots and create edit decision lists (EDLs). The EDLs then triggered requests back to London for the high-resolution material that matched the specific EDL. Based on the EDLs, MXF-wrapped flattened files were created and transferred from London to New York. The content was subsequently forwarded to craft edit stations to create the final content packages dedicated for distribution.

While most of the infrastructure is file-based, there is a fair amount of videotape being used in London, as well data tape (LTO-5) for archiving on a SpectraLogic T950 library that holds 900 LTO tapes. Jefferson said at the mid point of the games, NBC had archived both raw and finished footage onto more than 3000 hours in Connecticut. There are also a number of Sony XDCAM decks outfitted with solid-state memory for recording specific feeds.

“We’re doing more with less resources at these Games, and there’s a lot of moving parts, but we feel like we have a handle on it all,” Jefferson said. “There’s always something unexpected that comes our way, but the way we have served viewers wherever they might be has been astounding. And I don't use that word very often.”