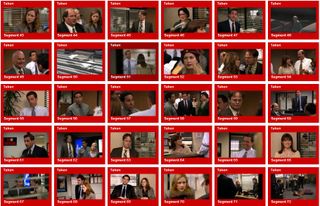 CYBERSPACE: NBC is offering up an episode of “The Office” for fans to recreate. The episode “Murder” was broken up into 86 segments, each of which can be recreated by a fan. Users select a segment, watch the clip, read the script and then make their own. As many as three people can select the same clip. If they haven’t uploaded their remake or re-reserved their segment within two weeks, it goes to someone else.

The remade clips will be posted at the show’s Web site, where fans will vote for their favorites. Those clips will then be mashed together into an entire episode, or “fanisode,” as NBC is calling it. The network doesn’t provide timeline on the project, but all clips are currently taken and uploading is available. The finished product may end up on TV.

“If your video is selected, it will appear in ‘The Office Fanisode,’ which will appear on NBC.com and may appear on NBC or our other television properties,” the network said.
-- Deborah D. McAdams