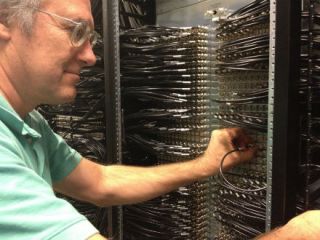 Modern VideoFilm is using the router to connect the equipment and systems that record and monitor SDI video with embedded audio and timecode, in addition to a smaller UTAH-400 router for its Santa Monica, Calif., facility.

“In our old facility, we had multiple sizes of routers and multiple levels of signals with subrouter systems and tie lines, which made our whole process a lot more complex,” said Siegfried Heep, Modern VideoFilm's chief systems engineer. “Now we simply have one big SDI router, and we can connect everything to it. It also gives us fiber ins and outs that allow us to go distances over 100 meters, which is critical in a building of this size.”

The UTAH-400/XL router sits in a 1056x1056 chassis, filled with I/O cards for 912 inputs and 804 outputs. Heep said this gives him the flexibility to plan for future growth affecting the physical configurations.

The UTAH-400/XL also has full-size BNC connectors, allowing the use of BNC crossconnect cables for physical configuration and signal troubleshooting. Modern VideoFilm also installed the router so that all the rear-panel BNCs actually face the front, and Heep said this was why the company required a single-chassis router.

“The ability to set up the routing switcher for easy access to the rear connector panel was an important design feature for us when it came to troubleshooting signals,” Heep said. “Another useful feature is an LED indicator of signal presence for every input and output.”

Because of the router, signals are distributed electronically without patch bays or distribution amplifiers. The UTAH-400/XL is part of a system of digital switches that includes SDI, RS-422, Fibre Channel, and Ethernet, allowing the company to hot-switch the signal from one show to another.