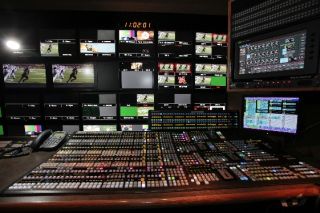 HUDSON, N.H., and NEVADA CITY, CALIF.: Game Creek Video is building its next fleet of production trucks around Grass Valley switchers, the equipment maker announced this week. Grass said Game Creek bought several of its Kayenne video production centers for new planned mobile units.
Game Creek is using the Kayennes on two 3G-capable 1080p60 HD production trucks to be ready for deployment this year. The new trucks will be dedicated to supporting sports productions. Game Creek’s Larkspur will work for ESPN, and a yet-unnamed truck will work for the YES Network that covers the New York Yankees.

Larkspur will go out at the end of this month for “ESPN College GameDay.” The YES truck will be ready by the end of August for Major League Baseball playoffs, and later be available for the National Football League’s network. Game Creek also has committed to taking delivery of four additional Kayenne switchers for future truck projects.

“Our crews like the layout and functionality of the Grass Valley Kayenne, so we have committed our scheduled new truck builds to this very powerful switcher platform,” said Pat Sullivan, president of Game Creek Video.

Game Creek has been using a Kayenne switcher nearly a year on college football games for ABC and NFL games for ESPN and Fox Sports, as well as for Fox’s coverage of the the 2010 Daytona 500 in February.