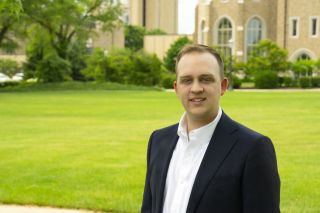 AUSTIN, Texas—Brock Raum joins systems integrator BeckTV as a project engineer, following his time at University of Notre Dame, where he served as director of live production and broadcast technology for the school’s athletics department. The company said his experience helps bridge the gap between broadcast operations and engineering.

Raum was previously supervising producer for Notre Dame Athletics, where he oversaw live broadcast productions as well as the university’s launch of the ACC Network. Prior to joining Notre Dame, Raum served as lead producer for the Kansas City Chiefs, where he created and maintained broadcast workflows and technical systems for the team’s live productions.

Raum is part of the board of directors for the Sports Creative Community and co-hosts Creativ (on iTunes and Spotify), a podcast focusing on the sports production industry. He holds a journalism degree with a concentration in broadcast production from the University of Nebraska, and a minor in business administration.