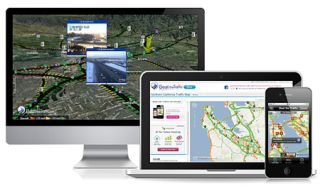 SANTA CLARA, CALIF.: Triangle Software LLC, maker of Beat the Traffic, reports record growth for the nearly concluded year—“including record numbers of users and media partners, the availability of its mapping technology for European broadcasters, and an expanding palate of tools to help travelers reach their destinations quickly and safely.”

Beat the Traffic said it added “a record 18 North American media affiliates in 2011, bringing the total number of Beat the Traffic’s television and cable partners to 56. Contributing to this milestone was the development and release of Version 6.2 of Beat the Traffic 3D, featuring a new suite of traffic reporting tools for broadcast media. Compatible with Windows 7 USB touchscreen TVs, Beat the Traffic 3D features traffic information on arterial and secondary roads and allows broadcasters to compute travel times between different distances on the fly, scroll over roads to show current speeds, and display live ‘incident feeds’ that show viewers traffic events as they happen. Newscasters can also zoom in and out of traffic hotspots, link directly to on-the-scene footage through SDI video cameras, and set up animated fly-through displays of Beat the Traffic’s high-resolution, topographical maps for a more captivating viewer experience.”

Also, Beat the Traffic’s is wrapping the year with a record 3 million monthly visits and 8.5 million page views, coverage of “most major European cities,” a collaboration on a real-time traffic open source map of the world, and the launch of Drivee, a new mobile app for the iPhone that provides drivers with real-time feedback on fuel use and the environmental effects of their driving habits.