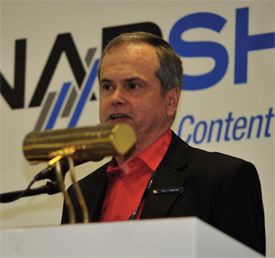 Roger Crooks
At the NAB Show, Czech systems integrator Aveco announced its intention to expand into the U.S. broadcast market.

In the 20 years since its founding in Prague, Czech Republic, the company has placed its products at more than 250 stations in India, Europe and South America, and Aveco tools have recently been installed at some Mexican locations.

Roger Crooks, vice president of sales and marketing, described the central theme behind all Aveco products and services as, "the glue that holds a pile of equipment together to make it all work as a consistent system."

At the press conference, Crooks highlighted Aveco's collection of applications, the ASTRA Suite of Tools, which is designed to facilitate a broadcast facility's ingest, content management and master control, as well as live production of news and other programming.

Crooks also explained that Aveco considers its systems' refined ability to handle metadata throughout all aspects of a TV station's workflow—from ingest to editorial to playout and finally to archiving—a key selling point.