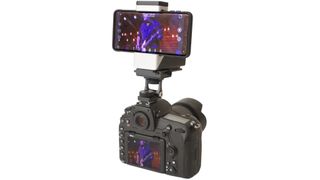 StreamGear Inc., after making its public debut at CES 2020, is ready present its VidiMo live production system for streaming from a smartphone to the world.

VidiMo is short for Video Director on Mobile. The technology turns a smartphone and HDMI video source (like a camera) into a virtual production and transmission studio, enabling the production of multisource, TV-style shows that can be streamed live, recorded or both.

The system works by combining VidiMo Go hardware with the VidiMo Show app, with VidiMo Go hardware doubling as an HDMI capture device and camera mounting system, while the app provides a complete live production toolkit on the smartphone. The technology captures the camera’s HDMI signal into iOS and Android smartphones for livestreaming. In addition, the app can create live shows that combine the HDMI input with the phone’s camera and other sources.

Users can switch between six customizable layouts that mix live video and audio sources with graphics, text and pre-recorded media clips. There is a two-button remote control that enables users to trigger app functions when they are in front of the camera.