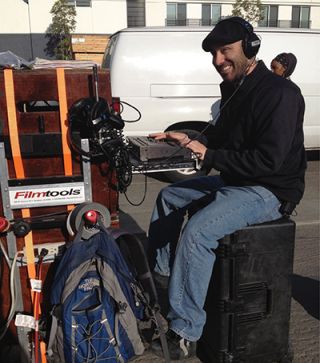 LAS VEGAS—Stickman Sound specializes in audio for television, with an emphasis on studio and field multitracking, EFP/ ENG audio and the integration of the two. Our goal is to provide our clients with a reliable recording system in a compact package that sounds great and can go anywhere. Many of the shows we support have a multicamera studio and/or field element, as well as single-camera documentary- style shooting in multiple locations. Sound Devices mixers and recorders have formed the hub of our mobile systems.

One of these shows, “Design Star 7,” is about 12 interior designers competing for their own TV show on HGTV. Each episode starts in the field, where the host reveals the task for that episode. To complement our multicamera setups used in shooting these episodes, we use two Sound Devices 788T recorders, equipped with CL-9 controllers.

Immediately after the challenge is announced, each of the seven ENG/EFP crews assigned spring into action and document the designers as they look for pieces to complete their spaces. These location packages also contain a Sound Devices 552 mixer and four wireless receivers to pick up various RF mics used in the production.

FOUL WEATHER OR FAIR
We also work on “Top Shot,” which starts with 16 marksmen, each going through a series of challenges until one is declared the winner. As this show is shot on a remote ranch high up in the mountains of Southern California, we needed a system that could operate off the grid, but could also provide the features and functionality of a studio setup.

The weather in this area can often be extreme.—on some mornings we begin shooting in heavy fog, but afternoon, it’s clear skies and 100 degrees. The elements are very much a part of the competition, so our gear must be able to withstand these harsh and very changeable conditions.

To capture audio for the series, we record the 16 marksmen, the show’s host, an expert who guides the marksmen, and all of the FX audio on three Sound Devices 788T recorders. Two of these are equipped with CL-9 controllers, and the third is controlled via a Sound Devices CL-WiFi and iPad. We also employ a Sound Devices 302 field mixer set up to feed our host dry IFB audio. In addition, we rely on seven Sound Devices 442 ENG/EFP packages (with wireless receivers, shotgun mics, IFB transmitter and an RF stereo link for the camera).

In our business, lastminute changes and additions are quite commonplace. With the modular design of our audio systems, it’s easy to accommodate any of our clients’ demands. Sound Devices gear is a big part of these audio packages and their reliability and the company’s support for their products brings us considerable peace of mind. We have to be consistently up to the challenge of capturing quality audio on location and owning Sound Devices equipment is very reassuring.

Fernando Delgado has been in the audio business since 1997 and started Stickman Sound, Inc. in 2004. He may be contacted atfernando@stickmansound.com.

For additional information, contact Sound Devices at 800-505-0625 or visitwww.sounddevices.com.