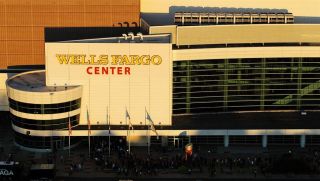 The CamPac2 wireless camera system handles ENG, portable camera mounting for sports production, helicopter and UAV links, as well as portable, mobile video and data links. The CP2 deployed at the stadium is a tri-band-capable unit that operates in the unlicensed 5.8-GHz band, as well as the licensed 6.4- and 7.1-GHz bands, without the need for any hardware changes.

The Newscaster DR2 diversity receiver is an updated model of its predecessor, the Newscaster DR. It offers new features including “intelligent” block-down converters, which actually communicate to the DR2 receiver, and the ability to control various operating modes. By utilizing the ability to block-down convert the received high-frequency signals to UHF band signals in the 150 to 850 MHz range, the DR2 now has the ability to extend its antennas remotely up to 1,000 feet (using Belden 1694A cable), complete with DC power from the receiver, as well as other versatile modes of operation.

By having the option to choose from two different versions of BDCs for the Newscaster DR2, these units can transmit and receive frequency bands from 1.99 to 7.1 GHz.