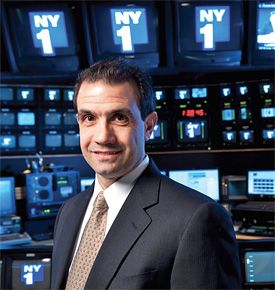 Here at the company’s NY1 we run with a 24-hour wheel format and the volume and pace of production are quite intense, as this also involves local insertion channels in Staten Island and Queens, N.Y., Bergen, N.J., and Spanish-language NY1 Noticias. Anchor segments and packages are recorded before air. The newsroom simultaneously generates content for our Web page, the VOD channel and a bi-hourly five minute newscast for CNN Headline News.

TIME FOR A BETTER SYSTEM

This aggressive news production workflow was formerly dependent on a mix of systems we had pieced together. It had all the shortcomings of integration workarounds and a technical upgrade was needed.

After evaluating several systems, TWC selected the Dalet Enterprise Edition all-in-one automation, newsroom and MAM system for managing the entire news production workflow. The Dalet package allows users to ingest, produce, playout and archive video content—all from one single user interface. Journalists can easily assemble a complete story that includes text, video, voiceovers and graphics right at their desktops. This is ideal for our reporter-driven workflow.

We have more than 30 ports in our ingest room that can place time-based or “crash-recording” video feeds onto the centralized Omneon MediaGrid storage. Media acquired in the field is also ingested into the server using the Dalet P2 file ingest tools, which consolidate all of the files into one video clip along with metadata.

Dalet MediaLogger is used for inputting additional information into NY1’s preferred data fields. This is a critical step for retrieving media whether it is in active production or in the archive.

Simultaneously other channel, Web and VOD teams can access the video and stories for their particular needs. All the newsroom and production tools are right on the desktop. Users have work-specific views but they are looking at a common pool of content.

Graphics entered in the timeline are played downstream over clean video. The clean packages can be exchanged among sister stations who add their individual logo bugs and graphical layouts. A built-in chat feature with the ability to send links to video also speeds internal communications. Contributors from satellite bureaus connect via high-speed network to NY1’s Dalet system where they ingest, edit and publish their clips on the same server.

The Dalet system has also improved collaboration between the editorial and technical teams. In our production control room, technical directors pre-assemble and record the anchor segments before air, firing off video and CGs with the Dalet OnAir/Carts module. In master control the same Dalet OnAir playout application handles the advanced automated 24x7 playout for each of the channels.

The Dalet system also gives better control during breaking news requiring live coverage. During the live event, start times of all upcoming stories in the playlist update automatically, allowing the producer to know when the next item will hit.

By consolidating production and automation within the Dalet system, we’ve also simplified ongoing maintenance chores and lowered support costs. The choice of an open-IT based system means that TWC can update systems as improvements become available.

Joe Truncale is vice president of operations and engineering for TWC’s local news division. He may be contacted at joe.truncale@ny1news.com.