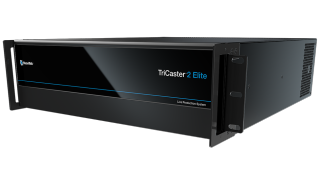 The TriCaster 2 Elite features new video production capabilities, including enabling users to leverage a multitude of the major video calling applications available and offering both future-proofed video over IP and traditional SDI support. NewTek believes this will provide users with a “better than broadcast” functionality and flexibility.

A high-speed 60x45 video crosspoint that includes 32 external inputs is part of the TriCaster 2 Elite, helping to automatically determine video format and resolutions up to 4Kp60. Each input includes proc amp tools, independent keying and cropping, as well as triggers for automation. There are eight configurable mix outputs in HD or two in 4Kp60, direct NDI outs of media players, multiple streaming encoders, continuous NDI conversion of all eight SDI inputs and eight independently selectable recorders for immediate replay.

The TriCaster 2 Elite is able to be integrated with existing equipment like control room systems, video walls, media platforms and more, says NewTek.

The system has eight mix/effects with four layers each, enhanced with integration with Adobe Creative Cloud tools. Visual storytelling automation tools with simplified teleprompter-based scripting with Microsoft Word document files are also included. In addition, virtual and augmented reality scenes can be rendered in real time from Adobe Photoshop files; there is support for non-standard framerate and aspect ratios; frame sync is available on every input; there’s animated GIF support in buffers; social media publishing; audio mixing and routing; and support for DANTE and AES-67, among others.

“TriCaster 2 Elite currently has no equal in terms of capability and value and I believe that it is the best product we have ever made,” said Dr. Andrew Cross, president of R&D for the Vizrt Group.