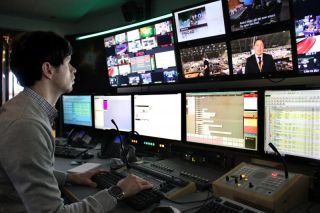 Mosart demonstrated how flexibility and support for the widest range of newsroom computer systems and broadcast devices make the Mosart automation system a powerful, economical solution for simple creation and delivery of news broadcasts.

Simplifying the many control tasks within the broadcast production chain, Mosart automation enables the human resources within a news organization to focus on creativity and content production, rather than on technical tasks.

In addition to enabling as few as one operator to run a newscast, the system provides the flexibility needed to handle breaking news.