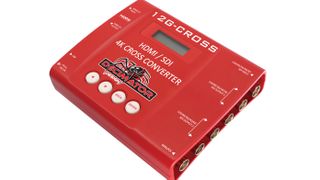 LONDON—Decimator Design has announced that its 12G-Cross low-power, portable converter is now available for shipping.

The 4K scaling engine can be driven by either the SDI or HDMI input, supports horizontal and/or vertical flipping and can be locked to either the SDI, HDMI or Genlock input. It is capable of scaling and/or frame rate converting between 351 input formats and 57 output formats. Among the support formats are 294 VESA formats in via HDMI input.

In addition, 12G-Cross supports 3G-SDI level A and B, enabling conversion between both. It also has an LCD screen and button control system.

Decimator Design is selling the 12G-Cross for $495.