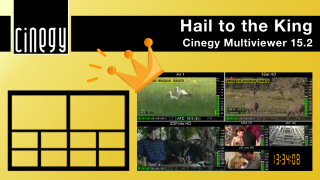 MUNICH, Germany—Cinegy GmbH has announced it is releasing a new version of its Cinegy Multiviewer platform, version 15.2.

Cinegy Multiviewer 15.2 is designed for use both on-premise and for remote monitoring applications. It can display and analyze signals from satellites, camera feeds, playout devices and other local or remote sources, raising alerts for detected signal problems. The video streams can be received over IP, eg UDP/RTP, NDI, SRT via Ethernet or using standard SDI cards.

New features for v15.2 include NDI support, using Cinegy Encode as an SDI output option, SRT encapsulated IP input and output stream inputs and support for encrypted SRT streaming on input. There is also support for 8K workflows via IP or SDL and integration with Cinegy’s Daniel2 technology.

“The new Multiviewer has a great many performance optimizations and compatibility enhancements to run even more reliably on the latest Microsoft operating systems, as well as embracing the latest and greatest technologies and protocols widely used in the industry,” said Lewis Kirkaldie, head of product management for Cinegy.