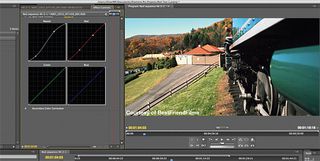 Updates and expansions of Adobe's Creative Suite have become roughly a yearly ritual. With the previous version—Creative Suite 4—we were focused primarily on if and how the integration worked between applications. With the new version, Creative Suite 5, the news has to do with dramatically increased performance levels, evolving feature sets and interoperability, and the joys of "design once, then output for many purposes."

Adobe Creative Suite 5 Master Collection user interface The feature that has gotten the most overall attention, and deservedly so, is the 64-bit support in Photoshop, Premiere Pro, After Effects, and Media Encoder. In general, if you have the hardware and software to operate in 64-bit mode, this means a couple of things: overall speed and performance boosts from faster processing and the ability to access more RAM; and the need to update all plug-ins when available (and many already are) to their 64-bit versions. For the record, 32-bit apps and plug-ins run fine in 64-bit systems, just slower. One of the specific performance boosts in 64-bit systems is the Mercury Engine, a 64-bit native and optimized, GPU-accelerated, multi-threaded playback engine that speeds rendering and effects preview, as well as playback, by as much as 80 to 90 percent, depending on format and task. If the system has an NVIDIA GPU with CUDA technology, the Mercury Engine leverages that GPU for even faster renders, previews, playouts, encodes and effects.

There are some new additions to the stable of applications that is CS5. One of these is Flash Catalyst CS5, a Flash design tool that is focused on creating user interfaces, Internet applications, Web sites and the like, and allows you to transform static artwork into interactive interfaces and content, all without having to author code. Another batch of new additions is the CS5 Live on-line collaborative services. These are complimentary and not fully implemented at the moment, but are soon to move to a subscription model, which will allow users to pay for the only services they need. Review is a browser-based forum for viewing and comment, available by invitation from within Photoshop, Illustrator, or InDesign (and eventually from within Premiere Pro); comments then appear in a Review panel inside the host application. BrowserLab is a simple way to test Web-based content in a variety of browsers and under a variety of operating systems by sending a sort of snapshot of a locally authored page and observing the results, even comparing things with an Onionskin mode. Story provides an online collaborative environment for developing scripts and shots lists, complete with tagging, metadata, and formatting tools. Acrobat.com is being developed as a full-fledged collaborative environment, complete with conferencing, live discussions, presentations, online apps, and, in general, everything you could want to create and use in an online workspace.

All of which brings us to some briefly noted, selected improvements to some of the applications we have all grown quite used to using. For more details on what's new and improved, check in at the Adobe Web site.

Photoshop adds tools for more precise edge detection, and thus better and easier selection and masking. There's also a content aware fill feature which can remove an element and replace it with details that blend with the background's content, lighting, colors, even noise. There are also new painting tools, including high dynamic range creation, a mixer brush (defines multiple colors on a single tip and controls the mix with the underlying colors), Repoussé (3D extrusion from 2D artwork, with surface control); and Automated Lens Correction.

Perennial workhorse After Effects gets—aside from the massive performance bump derived from 64-bit processing, longer RAM previews, and faster everything—the new Roto Brush, which is a quick, semi-automated, and surprisingly accurate way to mask a foreground object and separate it from the background. There's also AVC-Intra and RED camera support, including the Mysterium-X sensor and the latest "Color Science." The package also includes Apply Color LUT effect, to allow application and testing of custom LUTs in a variety of formats; DigiEffects FreeForm (a wide variety of 3D design options); as well as updated Color Finesse (color correction) and Mocha (planar tracking). New features in Premiere Pro, (aside from the benefits of 64-bit status), include native support for AVC-Intra, the latest RED builds, AVCCAM, DPS, XDCAM HD 50, and Canon and Nikon DSLR formats (joining an already impressive list of natively supported codecs); Ultra keyer; open workflows with ProTools, Final Cut Pro and Avid.

Illustrator CS5—an application that is daily playing a larger and larger role in my workflow for video, Web, and motion graphics work—boasts wide improvements in drawing, stroke, and brush modes. There's the Align to Pixel Grid function (which forces objects to the nearest pixel edge, thus keeping edges sharp); 1, 2, and 3 point Perspective Grid (as a drawing aid) and Perspective Selection Tool (as an aid to selecting and moving planes of objects).

I jumped into Creative Suite 5 with both feet as soon as I got access to it for this review. My test beds were a Mac Pro 8 core tower with 16 GB RAM, and a MacBookPro laptop with a Core 2 Duo processor and 4 GB RAM. The first thing I had to do was upgrade both systems to Snow Leopard, aka Mac OS X 10.6, in large part to take advantage of the 64-bit nature of some of the key applications in the suite. I'd been avoiding doing this for some months while waiting for the plug-ins and all the other components that I use daily to be available for the newest OS. All went smoothly, quickly, and well, by the way.

The first thing that you can't help but notice about CS5 is how fast the 64-bit aware applications and processes are. Speed boosts vary with task and system, but I regularly saw, and felt, things operate at three to five times faster than the benchmarks of a year or so ago with a 32-bit system and CS4.

In the course of my tests for this review, I used all the applications and workflows I have become accustomed to over the years, and tried to stretch a bit with some of the tools that are newly available. Overall, I have to say that everything performed as advertised, at least, and often better. All of the key new features for individual apps mentioned above work, work well, and are really worthy additions to each application's feature set.

What really caught my attention while reconstructing my workflow with Photoshop, Illustrator, After Effects, and Premiere Pro (primarily)—aside from how easy it was to move program material (timelines, documents, and the like) from one app to another—were two of the "additional components" that hadn't really made a huge impression on me, nor found much of a place in any of my workflows, up until this point. These are Bridge and Media Encoder.

Bridge is a catalog, access and transfer utility that has only gotten better over the past few years. Once it's pointed to a volume or directory, it immediately produces a catalog of all files in the hierarchy, providing thumbnails and previews when possible. It works with all manner of image, sound, movie, and PDF files, as well as Camera Raw. Bridge supports extensive metadata, keywords and sorts, collections, batch processing in Photoshop, Fireworks, and Illustrator, and has direct links to Soundbooth (for audio editing) and Encore (DVD and Blu-ray authoring). It's become an invaluable tool for keeping track of assets, coordinating inter-application workflows, and setting up batch processes such as file conversion and renaming.

Media Encoder is a simple batch media transcoder, and now 64-bit aware. One of the things that's particularly handy about it is that it will start encoding as soon as an item is brought into the single control/batch window, making it very handy to set up in conjunction with a watch folder. It is very easy to set and preview parameters and create new presets. Media Encoder is clearly set up to be direct competition to Apple's Compressor, which ships as a part of Final Cut Studio, and in my recent use, surpasses it by far in speed, quality, ease of use, and dependability.

All of the elements of Creative Suite 5 Master Collection are incredibly complete as far as media creation, presentation, and delivery systems, with the exception of dedicated 3D modeling and animation. Adobe seems to be very aware of the needs of its target users as it adds features, functions, and interoperability. One hopes that it can keep its developers' eyes on the goal and not get lost behind program and/or bloat. The complete Suite price delivers a lot of bang for the buck, though it may very well be overkill for many users, who would be advised to check out other more specific collections in the Creative Suite stable. Creative Suite, no matter the collection, continues to advance to possibilities for integrated media production, flexibility, speed, and functionality.