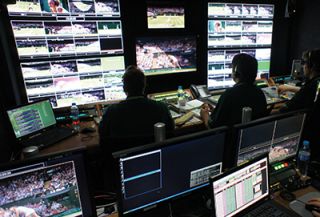 NEP Visions truck, parked outside the Velodrome in London.

LONDON—The tens of millions of Americans who watched NBC’s 2012 Summer Olympics coverage can thank NEP’s fleet of OB (outdoor broadcast) trucks for the network’s stellar performance in London. NEP has been providing NBC Olympics with mobile production equipment, personnel and consulting since the 1988 Seoul Games.

Such is the depth of the relationship between NEP and NBC, in fact, that NEP Vice President of Special Projects Errol Foremaster—who played a key role in organizing NBC’s London presence—serves under contract as NBC’s vice president of Engineering, Operations and Administration. Meanwhile, NEP personnel began working with NBC “approximately two years prior to the Games,” he said, helping plan and design NBC’s facilities at the various London venues.

ENTER THE TRUCKS
As with previous Olympics, NBC’s goal in London was to tell the American story of the 2012 Summer Games. To do this, the network needed its own remote production presence at the four major venues: Olympics Stadium for opening/closing ceremonies, plus track and field; North Greenwich Arena for gymnastics and basketball; the temporary Horse Guards Arena for beach volleyball; and Wimbledon for tennis.

Each of NBC’s remote production trailers were plugged into the Olympics Broadcasting Services’ (OBS) raw video/ graphic feeds. In some instances, NBC staff at each venue cut these feeds with video captured by their own camera crews, and commentary/interviews from NBC’s own commentators on location. The resulting mix was then sent to NBC’s production facility at the International Broadcasting Centre (NBC/IBC) in London, for final packaging and transmission to 30 Rock in New York.

In other cases, the footage was sent directly to New York for voicing, editing and graphics. It was then sent back to NBC/ IBC for integration into daypart/primetime programming originating in London, before being transmitted to New York. Some sports events simply went straight from the venue to NBC/IBC and then onto New York to Bravo, CNBC or MSNBC.

WHO WAS WHERE
Without a doubt, the Olympic Stadium was the crown jewel of the London Games’ venues. To serve this location— parked in a nearby “OB compound”— NEP’s London U.K. division NEP Visions dispatched its flagship pair of Gemini HD double-expanding production trailers.

Because the Gemini pair has two Grass Valley 90 input Kalypso video switchers and two Calrec Apollo 5.1 audio switchers, “the unit is capable of producing two live broadcasts simultaneously,” said Brian Clark, NEP Visions’ commercial and technical projects director. At the London Games, NBC stuck to doing one broadcast at a time from the Gemini trucks; the second area was used for graphics production.

NEP Visions’ Gemini trucks were equipped with 20 Grass Valley LDK 8000 HD cameras for the Olympic Stadium shoot. The company upgraded to these cameras in anticipation of supporting 1080p/3G video for Sky’s U.K. football coverage. Also onboard were 15 EVS machines and an Evertz 588x1176 3GB router. (Note: The camera totals cited in this article do not include any RF cameras, and any specialist cameras brought by NBC.)

NEP Visions’ HD2 truck was deployed to cover Olympic gymnastics and basketball at the North Greenwich Arena. Events at the Greenwich Arena were covered using NEP Visions’ HD2 and Mercury mobiles, with HD2 serving as the anchor unit. HD2 is fitted with a Grass Valley Kalypso video switcher, Calrec Sigma audio board, and up to 10 Philips LDK-6000 HD cameras.

IS THIS VENUE BUILT YET?
The Olympics are as much a worldclass event for remote broadcast producers as they are for athletes. The scope of the events, the size of the venues and the demanding schedule of multiple events pushes the best producers and engineers to their limits.That said, it wasn’t the London Game themselves that represented the biggest challenge for NEP Visions. This is because the Olympics took place on the company’s home turf, with easy access to its facilities. Instead, it was the fact that facilities were still under construction when the broadcast crews began to move in.

As a result, in order to comply with British safety laws, NBC and NEP’s staff had to pass construction safety training to gain accredited access to the venues. Not surprisingly, “we didn’t have this factored into our timeline,” Foremaster said.

Meanwhile, the tight security on the Games’ perimeters made it difficult to move equipment in and out, according to Clark. The good news is that the Games themselves were well organized. “Working with NBC went very well, as did coordinating with the OBS and LOCOG (London Organising Committee of the Olympic and Paralympic Games),” Clark said.

These hurdles notwithstanding, NBC’s London Olympics coverage went pretty much without a hitch, Clark said. “It was a very successful event, and we were all very happy.”

The next stop for NBC and NEP: The 2014 Winter Olympics in Sochi, Russia. Given that these Games open on Feb. 7, 2014, NBC and NEP are already planning their production truck deployments for this broadcast.