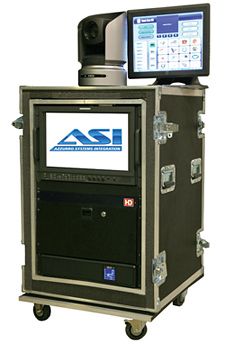 Videojournalists are everywhere it seems, and whether it’s around the world, or in our own communities, the volume of media they are creating is staggering. That media would be useless if there were no way to distribute it. Although great strides are being made in the world of IP delivery, satellite and microwave technologies are as strong as ever. The Internet has not replaced RF yet, and it’s not likely to for a very long time. In fact, the two technologies compliment each other, as witnessed by the interweaving of terms between the products. At this year’s NAB Show, IP and RF products have become the match made in Silicon Valley.

Azzurro Systems Integration will debut the latest version of the company’s AzzurroCam, tailor-built to provide sports leagues, news networks and radio studios with the ability to manage multiple remote sites and studio configurations from one central location.

WeatherMetrics will offer for review the StreamVision, for streaming cameras live to your Website, along with FlexMOBILE- automated foundation, and WeatherVision HD 3.0 for HD-quality tower cameras that deliver live/time-lapse video from remote locations.

CCS/Prodys’ new Ikusnet gives users the choice of sending live news via satellite or IP. Ikusnet integrates all the functionality of an ENG van into an extremely compact portable package.

DekTec will promote the DTA-2107 DVB-S2 satellite modulator for PCI Express, along with the DTE-3137 networked DVB-S2 satellite receiver, which supports QPSK, 8-PSK, 16-APSK and 32-APSK with IP output.

Sencore will offer their SMD 989 DVB-S2 modulator, for two DVB-S2 RF transmissions, along with the IRD 3000 series of receivers/decoders, suitable for distributing video services on IP, satellite, and ASI networks. Also for review will be the MRD 3187B receiver decoder, which adapts to almost any contribution, distribution, or backhaul environment.

Vislink will offer NewsLite, a portable, IP-enabled SatCom terminal designed for use with current and new lightweight antenna systems.

Comrex plans to show off its LiveShot IP Video Encoder, which offers real-time, low-latency video and uses 3G, 4G, Wi-Fi, BGAN, DSL or any other available IP data circuits. for connectivity. Its “store and forward” feature sends higher resolution video to the decoder when the live shot is done. The compact LiveShot will attach to a professional camera’s battery mount and weighs less than five pounds.

DSI RF Systems will highlight the NewsShark Portable wireless, live video transmission system. The 2.5 pound, encoder snaps on the back of most ENG camera systems and uses both 3G and Wi-Fi infrastructures to return live video and two-way IFB from anywhere the technology is employed.

Streambox will feature a new version of its Streambox Live broadband video contribution service that enables Android users to upload high-quality video, along with the ACT-L3 software encoder, which is now capable of transporting HD video with only one cellular modem on 4G LTE mobile broadband networks. Also for review is the SBT3-9300 HD/SD video transport system for HD/SD newsgathering.

TVU Networks will offer up their TVUPack for mobile newsgathering. The TM8000 offers high-powered H.264 video encoding and delivers an HD signal, even with limited transmission bandwidth. TVU’s Variable Bit Rate technology automatically adjusts the bit-rate according to the total available aggregated bandwidth.

Vislink LINK XP1310Vislink will unveil the LINK XP1310, a high performance H.264-compliant HD wireless camera transmitter with an output power of up to 200 mW. The company will also show the AMG/ASG2100 Mobile and Studio Gateway, which is designed to enable a file-based workflow between remote ENG/OB resources and the studio.

VidOvation will unveil the VidLink 1.5G uncompressed 60GHz RF HD Link, for 1.5G delivery of SDI, HD-SDI and DVB ASI video formats. Support for two channels or 3D HDTV with a left and right eye transport is available when combined with the NuMedia Technology Dirac-Pro near lossless compression system.