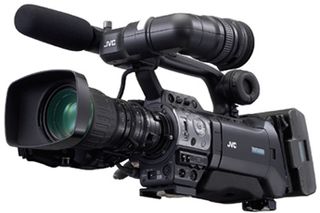 Several of the camera makers are holding their cards close to the vest in the run-up to the 2011 NAB Show, waiting until the show’s opening day to announce new products. Here’s what we know as of press time.

ARRI will unveil its Alexa Plus, an upgrade to the company’s Alexa camera. It adds built-in wireless remote control, the ARRI Lens Data System (LDS), additional monitor video and RS power outputs, lens synchronization for 3D, and also built-in position and motion sensors. The new camera shares Alexa’s image performance, simplicity of operation, reliability in extreme environments and versatility of workflow. Also look for the RCU-4 compact, robust, cabled remote for the Alexa and Alexa Plus cameras, and also the WNA-1 wireless network adapter accessory for the Alexa system that allows any device with a Wi-Fi connection to communicate with the cameras.

Grass Valley has indicated there will be a new camera introduction, but no further details are available. GV is planning to return with the LDK 8300 Live Super Slo-mo camera that received a Technical Emmy at the recent CES. The company will also introduce a new 7-inch viewfinder with improved brightness and resolution—the LDK 5307—which can be used with all current Grass Valley HD cameras.

Hitachi Kokusai will debut its SK-HD1200 high-performance 3G HDTV studio and EFP camera. It features the latest generation native three-CCD 1080p technology, including three 2.3 million pixel 1080p CCDs. It’s dockable and is capable of multiple configurations using optical fiber, digital Triax cable and wireless transmission adapters. The SK-HD1200 provides native 1080i or 720p video, and there’s a solid-state HDTV recorder option with Panasonic’s P2 format, and also a studio adapter with Ethernet connectivity. Also look for the Z-HD5000 studio/ field production camera which provides 1080i video. It can be docked to fiber, triax, or a RF wireless adapter, or can be used with a P2 HD recorder for standalone operation.

JVC will showcase its GY-HM750U ProHD camcorder which delivers 1920x1080 images, and records at selectable data rates of up to 35 Mbps. The new camcorder can record HD footage in 720p, 1080p, and 1080i, as well as SD footage in 480i. It uses JVC’s established native file-based workflow, and includes a dual card slot designed for recording to SDHC cards and/or an optional SxS recorder. JVC will also show its KA-AS790G ASI module that provides a compressed MPEG-2 output for direct microwave transmission and long cable runs to OB vans. The module attaches to the back of either the GY-HM790U or the new GY-HM750U ProHD camera without external wiring or adapters.

Panasonic is holding its new camera news until the show, but will introduce a wireless system for its new AJ-HPX3100 1080p P2 HD camcorder. The AJ-WM30 system provides a transfer of critical camera information between the HPX3100 and other devices including PCs, iPads and iPhones.

Sony will unveil three new NXCAM camcorders, including one designed for 3D capture and featuring dual lenses and a 3D LCD display. The second features Sony’s Super 35mm sensor, and the third is a dust and rainproof compact model that includes 96 GB of internal storage. Also look for the new PMW-F3 camcorder, designed for a wide range of digital production applications and featuring the Super 35mm imager that provides low noise and delivers a shallow depth of field. Footage shot with the PMW-F3 can be seamlessly intercut with that from Sony’s F35 and SRW-9000PL cameras.

I-MOVIX will show a new version of its SprintCam Vvs HD, the ultra slow-motion system designed for live HD broadcast production. It has the characteristics of previous SprintCam super slow motion cameras, but is capable of frame rates of up to 2,700 fps in 1080i/50 or up to 5,800 fps in 720p/60, or more than 200 times slower than live action.

Polecam will unveil its GoalCam and StadiumCam sports coverage systems. Each incorporates a 1/3-inch CMOS HD-SDI imager which allows the use of ultra-wide-angle lenses with high corner resolution. Both GoalCam systems are fitted with 125-degree low-distortion lenses that produce images without the usual barrel distortion.

Vision Research will show the Phantom v341 digital high-speed camera for military and scientific research applications. The new camera incorporates a 4 megapixel 35mm format sensor and has an almost 3 gigapixel per second throughput.