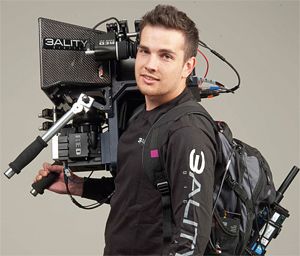 3D will be more than a tantalizing illusion at the 2011 NAB Show; it will be a dominant theme interwoven into the fabric of this year’s event. New this time will be a series of symposia covering key aspects of 3D deployment on television. Sessions will cover 3D acquisition and workflow, case studies and lessons learned, along with the nuts and bolts of 3D standards, display technology and other key issues.

As you might expect, the number of companies exhibiting 3D products is increasing. This year rather than jamming them all into one central area, there will be several clusters of exhibitors with 3D products, with at least one in each of the major exhibit halls at the Las Vegas Convention Center.

3ality Digital TS-5 Light 3D Rig3ality Digital will introduce its TS-5 Light 3D Rig, a streamlined version of 3ality Digital’s TS-5 miniature beam-splitter rig. It provides the same flexibility and precision and offers the same capabilities as 3ality Digital’s full-size camera systems. It can be used as a handheld, mounted on a Steadicam, and fit into tight spaces that won’t accommodate a larger rig. The company will also showcase its Handheld Wonder Module, a versatile, integrated and lightweight unit for handheld 3D production.

AJA will display its newest mini-converter, the Hi5-3D. The unit combines dual HD-SDI inputs into various multiplexed 3D formats for output on true 3D HDMI 1.4a and SDI to enable simple and flexible stereoscopic viewing on 3D monitors and projection systems.

Band Pro will show a new high-capacity 3D recorder by Astrodesign. The compact HR-7502 records up to 180 minutes of uncompressed 3D HD footage on a removable 1.5 TB solid-state drive, and can record dual link 2K/HD 2048/1920x1080 in most standard frame rates, as well as RAW Bayer 12-bit and anamorphic 10-bit video.

Camera Corps, exhibiting in the Bexel booth, will introduce its 3D Universal RCP Main control panel, which allows six cameras of different makes and models to be remote-controlled from a single panel. The control has all of the functions of the company’s standard control panel, plus the ability to individually adjust the two cameras required for 3D. When the cameras are adjusted to the required position it is possible to “lock” both cameras together and any further adjustment of the cameras will transferred to both cameras.

Cineform will unveil new partnerships and new product lines expanding on its hallmark 3D editing software, Neo 3D. This includes workflow support for new cameras such as the Alexa and Epic. Also check out their First Light product that provides color correction when using Premiere Pro, Final Cut Pro, After Effects, Vegas, and most AVI or QuickTime applications.

Convergent Design will demonstrate an upgraded version of its Nano 3D recorder, which is billed as the world’s smallest, lightest, lowest-power 3D recorder. The Nano 3D records QuickTime/MXF files (left and right) to two separate CF cards at data rates of up to 280 Mbps.

Dashwood Cinema Solutions will introduce Stereo3D CAT, which simplifies the calibration of left and right eye cameras on location; Stereo3D Toolbox, which manages the demuxing of side-by-side, interlaced and over/under image formatting; and Dashwood Stereo3D Utilities, which support the ingest of 3D footage from various cameras and the output of 3D files to monitors and recorders. Also look for the new Dashwood 3D chart that has disparity correction and HIT convergence adjustment with automatic scaling.

Element Technica will introduce Atom, a smaller stereo rig geared for the Red Epic with PL primes and small zooms. It can be quickly switched from side-byside to beam splitter mode and can use controls from Quasar, Pulsar or Neutron rigs. Also showing is the THC (Technica Hand Control) series of 3D rig controllers. The THC-S model controls stereo alignment while the THC-L controls the zoom, focus and iris of both lenses. The company will also present advanced functionality in its THC-S hand controller, which has three input devices: a large wheel for convergence on the right side, and the choice of a slider on top or a smaller wheel for IO control. When the Technica 3D rig is integrated with other products like the v3, STAN or Sony 3D image processor, the small wheel is enabled to manipulate the most common parameters of the attached systems.

Genus Hurricane 3D rigGenus will unveil its Hurricane 3D Rig that was built in partnership with Alister Chapman. The Hurricane Rig is targeted to make high quality 3D accessible to video enthusiasts, owner operators and others that would have previously found the cost of a mirror rig prohibitively expensive. The rig has simple, easy to use manual control of camera alignment and camera adjustment, making the rig particularly well suited to educational users, training establishments and experimenters, because of its simplicity. Typical camera pairs include Canon XF105’s, Canon 5D MKII’s or Sony XDCAM EX3’s.

Hydroflex will show its Neutron Borg 3D housing that enables shooting 3D underwater down to 60 feet with the company’s Neutron rig and SI-2K cameras. The Borg 3D unit weighs in at 114 pounds and may be operated by a lone diver, with 3D interoccular and convergence settings adjusted topside.

Fujinon plans to exhibit a new line of 2/3-inch B4-mount HD motor-driven (MD) lenses with 16-bit encoding, specially designed for 3D and robotic purposes. The set includes the A4x7.5BMD-DN L/R and six more zoom lenses. They can be controlled with Fujinon’s 3D synchronous controller, or by third-party units.

JVC will likely show its 2D3D1, a low-cost 2D-3D converter, as well as a 3D display or two. The company’s 46-inch GD-463D10 3D monitor is one of the largest such field monitors available. The big question is whether JVC will bring a pro version of its GS-TD1 3D camcorder which launched at the 2011 CES.

MARVIN Technologies will introduce its new MARVIN 2.0 on-set camera data management system, featuring stereo 3D support. MARVIN 400 can process 400GB of camera data per day, MARVIN 800 can handle 800 GB per day, and the MARVIN 3D can ingest up to 1.5 TB of regular or stereo 3D footage per day.

MiraCube will show their line of passive 3D monitors that include a built-in 3D formatter, and a 2D/3D switching button to facilitate the use of the monitor for normal computing. MiraCube achieves their 3D separation using Wire-Grid Polarization (WGP) to achieve 178 degrees of viewing angle and high viewing resolution of up to 1920x1200.

P+S Technik will introduce the Evolution upgrade for its new Freestyle 3D Rig. It consists of two stronger camera plates designed to withstand loading from heavier camera setups. The Evolution upgrade option ensures the highest stability for such cameras as the Alexa, RED One, and HS-2. The Freestyle 3D rig itself is designed to offer a maximum of creative choice for camera movement in 3D production. Camera weights are kept in balance via wireless adjustments in the stereo base. The integrated motor system for stereo base and angulation adjustments optimize weight and are compatible with available wireless remote control systems. The company has also added a diagonal support to its Standard 3D Rig, which increases the rigidity of the rig for stereoscopic mounting of larger camera and lens combinations. And an optional motorization system allows precise remote control adjustments of the standard rig.

Polecam will introduce its 3D-capable head for use with paired HD mini-cameras such as Toshiba’s IK-HD1 and the HRO69. The 3D-mounting plate attaches directly to all standard Polecam rigs and is optimized for studio shooting and close-ups.

Sony MPES-3D01Sony will showcase 3D hardware and software that was used to broadcast 25 World Cup 2010 matches, and which is now installed on 3D live trucks used by BSkyB and Telegenic. The cameras include HDC-1500 studio and HDC-P1 (POV) models, which are used in 3D rigs worldwide. Also look for Sony’s MPES-3D01 which performs real-time stereo alignment. Also showing is the MPE-200 image processor that’s used to handle multiple streams of ingested 3D footage.

Booth visitors can also expect to see 3D effects added with the MPES-FX01 effects generator. There’s also the MPES-2D3D1 which can convert 2D video into 3D in real time. The 3D captured and processed may be viewed on Sony’s 42-inch LMD-4251TD or 24-inch LMD-2451TD 3D field monitors which use the 3D circular polarizer system. Also, check out Sony’s MVS-8000X production switcher, with enhanced 3D functionality.

Terranex will unveil its real time 2D-3D convertor, the VC1-2D-3D, which is already being used to repurpose 2D program archives into 3D by major European broadcasters.

Transvideo will be at the show with their new HD 3DView S series 3D monitors which feature a built-in genlock analyzer and synchronizer for synchronized output with SDI signals.