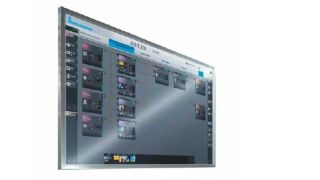 Rohde & Schwarz is best known to broadcasters for its transmitters and test equipment. Since the purchase of DVS, it has added video servers and storage to the lineup. At IBC, Rohde & Schwarz (R&S) launched its new headend, adding a new component in the broadcast chain to its portfolio.

With the days of single operation long past, even small broadcast operations are airing a multiplex or primary and subchannels and the market for multiplexing is increasing.

We have already seen function collapse in playout. Servers, switching and automation have been integrated into a single box based on a commodity IT server. R&S has extended this concept to the headend, with the release of the R&S AVHE Audio/Video Headend. The system accepts SDI and ASI inputs, encodes video streams to MPEG-2 or H.264 and multiplexes up to 16 channels into a single transport stream. The product uses a powerful IBM server to do the heavy lifting in software, and a separate gateway to handle signal interfaces.

R&S is following two trends, one is to use IP over Ethernet connections wherever possible; the other, partially as a consequence of the former, is to use commodity IT platforms

As IP becomes ubiquitous, R&S has adopted the protocol whole-heartedly for this product. All system interconnections within the headend are IP-based. Combine this with the IT server, and the product can leverage the relatively low cost of platforms built for a much wider market that broadcast alone.

The headend comprises a 1RU x86 server and 1RU gateway to handle interconnects between the IP domain and SDI, ASI and AES signals. IP may be the way forward, but to interface with existing equipment such interfaces are essential. The interconnections follow SMPTE 2022 for the encapsulation of MPEG streams and the use of forward error correction to increase the system robustness.

The core functionality is performed in software on the server, allowing for easy updates, for example, from DVB-T to DVB-T2. The system supports single frequency networks (SFN) using IP to synchronize to a network time protocol (NTP) server.

Also included is a multiviewer, the Broadcast Video Wall, which can display up to 32 video signals as well as status information and error messages.

To provide redundancy, elements of the system can be switched into circuit as appropriate with a standard IP switch, avoiding the need for conventional video routing. Using R&S CrossFlowIP the main signal path is adaptively routed through a 1 + 1 redundant system.

First to go on-air with the AVHE100 is Bayerischer Rundfunk (BR), Bavaria’s public broadcasting service. BR is also using the R&S AVG100 audio/video gateway, which to convert broadcast signals such as HD-SDI, SD-SDI and ASI into IP transport streams. The broadcaster is using the headend to test DVB-T2 transmissions. BR broadcasts one program in HD and several programs in SD to Munich, and the surrounding area.

It does seem that bit-by-bit, the BNC and XLR connectors are being replaced by the RJ45. Standards like SMPTE2022 are helping the deployment of IP-based systems that can replace HD-SDI or ASI connections. Function collapse simplifies systems, interdevice communication become intra device, with attendant savings in complexity and consequentially cost and power savings.