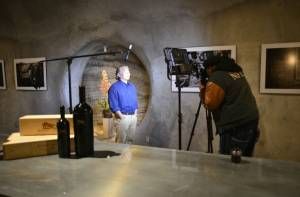 The first challenge filmmaker Ajay Johnson was tasked with when shooting a series of promos for ORII SAVOR International, a U.S./China based promoter of wines and spirits, was how to light the delicate wine without damaging it. His solution was Litepanels LED lighting.

Litepanels allow Johnson to be a production predator as a gaffer, DP, interviewer and camera operator. This gives Johnson complete control of the environment. Litepanels 1x1s, the Sachtler Ace tripod, and Anton/Bauer batteries power gave him the reliability that every professional needs to succeed.

o teams. Colleague Eddie Wolfl shot photos and videos of the wineries, while Ajay shot the interviews himself. With only one hour to work at each winery, Litepanels lights were the only solution. They are powerful, lightweight and versatile, and there was no danger of them harming the wine due to heat in the close quarters where scenes were shot.

It was raining most of the time during the shoots, so crews were forced to find attractive spaces within the wineries to shoot. Because the two Litepanels 1x1s were powered by Anton/Bauer batteries, they didn’t require AC power, they allowed fast and safe set-up, and they were easy to move around as shots were set.

The Litepanels 1ft-sq LED arrays are less than 2in thick and generate virtually no heat, so they were just the ticket for this delicate environment. One of the rooms shot in was highly climate-controlled because it housed special high-priced vintages. These brands are upscale and coveted wines. The Litepanels fixtures were a mere foot away from the bottles at times and did not change the temperature of them at all.

Johnson’s video promos for ORII SAVOR, a new company owned by Tom Wen and Grace Tsai that exports and promotes U.S. produced wines and spirits, will be seen in HD on the web, on big screens at conventions and on select cable channels.