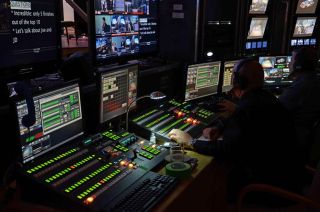 Spectrum’s President Preston MacIntyre explained that they purchased the Granite system to create a high-end broadcast appearance for stage productions. “We were looking for a way to enhance production values for certain events, elevate their presentations from the PowerPoint look,” he said.

“One thing that seems to be a problem in new switchers is a lot of frame delay,” MacIntyre said. He cited the Granite’s “very minimal latency” as important to his selection because of the issues that delay can cause for live productions.

The system’s optional 12 SDI outputs were another attractive feature because, MacIntyre said, corporate events have complex routing needs, with the number of outputs often exceeding the inputs.

During the NASCAR event, Spectrum heavily utilized Granite’s built-in workflow tools. The Fluent Clip Store was used to access and playback over 100 clips, which were sent to various screens and combined with other sources and effects throughout the program. MacIntyre said Fluent Macros triggered each cue correctly and without a predetermined timeline.

“Every single cue was a whole package of cues,” MacIntyre said. “Every step in our run of show was represented by a macro.”

MacIntyre said all source content originated from the Granite, and its native HD system produced an outstanding look. The Fluent-View with Quad Monitor option was also an asset, providing multi-view layouts customized for the production personnel.

MacIntyre said the Granite system will be used for future events that require significant video playback or need to take advantage of the system’s built-in robotic camera control and other automation.