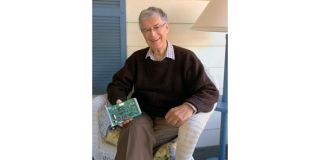 IROQUOIS, ONTARIO, CANADA -- John Ross founder of Ross Video, has been awarded the Order of Canada, the highest civilian honor in the nation. Ross was named an Officer of the Order, which “recognizes a lifetime of achievement and merit of a high degree, especially in service to Canada or to humanity at large,” according to the Governor General David Johnston.

“What a nice acknowledgement to receive!,” Ross said in an email shared by his son, David. “It’s amazing to be in the same category as Lloyd Robertson, Bob McDonald and many others who are so well known to the public.”

Thirty-three such awards were given out this year. Ross, pictured at right holding a card he designed for the International Space Station, was the sole recipient recognized for achievements in engineering. Previous winners include Michael J. Fox, Celine Dion, KD Lang, disabled athlete Terry Fox, Leonard Cohen, Wayne Gretzky, Lorne Michaels, and, according to Ross, “all the members of Rush.” He will likely receive the award at a ceremony in Ottawa in June.

Ross’s fascination with engineering began with an electronics book he discovered at age eight. By the time he was 12 years old, he as designing small transmitters, he said.

His professional career started at age 14 at CKY-FM in Winnipeg, Manitoba, where he became the transmitter operator for the summer.

“I lived alone at the transmitter site way out in the country on Dawson Rd., a few days at a time, woke up at 5:30 a.m., did level checks with the city studio before sign-on, turned on the huge room-filling transmitter one stage at a time, adjusted for 5 kW output and did other things as necessary. This I thoroughly enjoyed and did well,” he said. “As a result I became the youngest known operator of a commercial radio station transmitter in Canada.”

At age 15, Ross said he made a “150 watt transmitter on the broadcast band that could be clearly heard all over Winnipeg. At the time, CJOB, the most popular station, only has 250 watts! Eventually, being afraid of being caught for illegal broadcasting, I obtained my amateur radio license (VE4EJ), converted the transmitter to short-wave and enjoyed communicating by Morse code with other operators in Europe and elsewhere,” he said.

In 1956, while still in high school, Ross built a functioning TV receiver using surplus parts and a green radar tube (pictured in an article from the Winnipeg Free Press, at left). He was able to pick up the closest station 450 miles a way for a few seconds per hour, he said.

The CBC had picked him up in 1954. “I became the youngest member of the pioneering ‘start-up’ crew of the first TV station between Toronto and Vancouver. I had a wonderful job and thought I was in heaven,” he said.

During coffee breaks there, Ross built a crude special effects amplifier that intrigued a producer, who implemented it on a program called “Spotlight,” much to the chief engineer’s chagrin.

“We don’t have any equipment that does wipes. Where the hell did those effects come from? They’re unapproved and illegal,” Ross recalled CBC Regional Engineer Roy Cahoon saying. Cahoon later softened and allowed Ross to build a second version on his own time. That device was the first precursor to the Ross switcher, he said.

“It was demonstrated during ‘Spotlight’ when I was interviewed by Warren Davis,” Ross said. “I was terrified to be in front of the camera for the first time and nervously whipped through many irrelevant wipe patterns.”

Ross’s design would become the first electronic effects system to be employed by the CBC. He went on to design a transistorized wireless mic adaptor, and the first color TV to decode color images from a Canadian transmitter. As successful as his designs were, they were not what he was hired to create at the CBC, Ross said. A kindly manager at the CBC encouraged him to go to night school and finish his high school education, and to enter a university engineering program where he learned how to “calculate circuits instead of designing by trial and error.”

He would go on to design what he described as the first solid-state TV production switcher, and later a solid-state master control switcher. He also was awarded a chroma key patent that led to the use of the green screen, and developed an all-electronic tape editing system.

Ross founded Ross Video in his home in Montreal in 1974. Despite his remarkable engineering career up to that point, Ross had no savings, so he sold a 1943 derelict Army aircraft that he had restored for $3,500. With another $3,500 from the bank, he developed a prototype switcher, and eventually located the company where it remains today, in Iroquois.

Ross Video now has 450 employees, and equipment deployments around the world. Ross retired from the company in 2005, handing it over to his son, David, who now serves as president, CEO and chairman of the board.