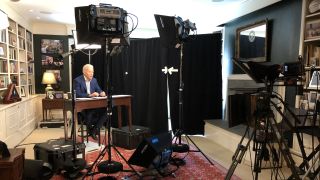 WASHINGTON—Like almost every other part of our industry, suppliers of professional lighting have seen the impact of the COVID-19 pandemic on manufacturing to customer support. And with industry trade shows cancelled for the foreseeable future, vendors are having to improvise the way they market, support and sell to their customers.

Tobi Sali with BB&S Lighting said that his company moved operations to employees’ homes and worked hard to maintain a consistent and reliable point of contact and support for their customers.

“I kept my office open two or three days a week. I was always available 24/7 on the phone and on the website,” he said. “And we were handling orders. Our warehouse in Las Vegas stayed open the whole time.”

Since BB&S products are manufactured in Denmark, Sali said they took extra precautions when taking deliveries.

“When we got a shipment in from Copenhagen, we would isolate it for four or five days before it ever got opened,” he said. “We added an additional week of it sitting there sprayed with alcohol to make sure that we didn’t have any problems.”

For the NAB Show, BB&S was going to debut its Compact Beamlight BiColor (CBL), a lighting unit that offers a range of 2,700–5,700 degrees K and 98 TLCI. The company has also upgraded its Area 96, adding a fan and upping the output, according to Sali.

Cineo had planned on launching the ReFlex, a production-oriented 15A, 125,000 lumen LED-based hard light, according to Rich Pierceall, vice president of LED operations for the NBCUniversal-owned company.

“All productions have gone on hiatus so we’ve delayed the launch and instead we’ve been doing a series of beta tests to customers to basically try to get a more refined product,” he said. “So, that’s how we’ve been spending the time in terms of that product that we were going to release at the NAB Show. And so we’re anticipating releasing that product probably by the end of July when production comes back.”

Although production may be on the way back, many installation projects have been put off for now, he added.

“We found that most capital relighting projects have been postponed,” he said. “So, we anticipate fewer projects that were scheduled to be green-lit, even in the second half of 2020, to be pushed into 2021.”

With trade shows cancelled for the foreseeable future, Pierceall said he personally thinks the dynamic of the events will be changed.

“This is an interesting test period, how can we effectively market products without relying on trade shows, which is something that lighting people really rely on to bring out new products and to show people how things work,” he said.

In terms of future product development, Pierceall says R&D continues to be an important focus for the company.

“We’ve spent a considerable amount of time looking at things like VR, which is going to be a bigger thing in production than we’ve ever seen before,” he said. “And we’re looking at how can we do more with less in terms of smaller crew sizes and automation and control.”

Business has been steady for ARRI despite current events, according to Jason Inouye, technical sales representative for the company.

When the lockdown started, “a lot of marketing executives reached out, telling me they needed to get cameras for marketing TV shows, commercials, but couldn’t have anyone in front of talent because of social distancing,” he said. “So we developed this remote solution where we can bring in our ALEXA mini LF camera system, or any of our ALEXA AMIRA camera systems, and be allowed to use cellular network bonding to send a stream out from the camera and it could be recorded offsite somewhere. A remote start would trigger the camera as well from anywhere in the world.

Integrating IP control capabilities to its cameras and lighting equipment has been standard for ARRI for a while now, according to Patrick Schulze, lighting systems application engineer.

What products are now most in demand for home studios? According to Schulze, it’s ARRI’s SkyPanel series. “The S30 and the S60 would be the most popular version for home studios and remote locations where you don’t want to have somebody in the space,” he said. “If it’s in the talent’s home, it could be something that could just be set up and all controlled remotely through IP.”

Kino Flo, which has a large presence in both film and television has had an “up and down” spring, according to Scott Stueckle, sales manager for the Los Angeles-based lighting provider.

“More people are lighting themselves as they have migrated back to their homes or to office spaces that are depleted of crew people or lighting people,” he said. “We’re still doing a number of two- and three-light kits for those markets. We’re also doing a lot of work with CNN, QVC, HSN, all those types of companies, broadcast news, small web studios. We’re still doing a fair amount of those in two ways, fulfilling old orders that were in the system, but also quoting a lot.”

“The diva light 21 is an LED version of our older, more established legacy diva light fluorescent systems. And it’s being used quite a bit for studio, location and interviews,” he said.

After the NAB Show was cancelled, Stueckle said it gave the company the opportunity to review its new products rather than launching them outright.

“We were going to introduce a new ribbon light line of products; they’re the only five-color ribbon lights in the market,” he said. “They’re designed with the same firmware and LED emitter technology that we have in our other fixtures, so it allows you full compatibility. You don’t have any drop off in colors or any drop off in white light quality when you’re using our ribbons and they all have individual control.

“We also have a new individual controller for our tubes that allows you to run up to eight tubes individually in different kinds of pixelation sequences and so forth,” Strueckle added. “But I’m not showing that until people come out and start doing business again. So in the process, we’re refining those, improving those, adding features, just trying to time it for when business comes back into play. We’ll go ahead and probably have a new version, compared to the one we would have shown at NAB—we’ll probably have a more evolved version and that will probably show starting July or August.”

As TV and film production begins to resume, Stueckle said the process will be similar to what is being seen in public health efforts as well.

“When the stay-at-home orders and essential business orders were passed down, it was like a light switch essentially went from ‘everything on’ to ‘everything off,” he said. “Coming back into it, from what I can see here in Hollywood, it’s like they’re ‘dialing it up’ a little bit and then they ‘dial it back.’

“It’s going to be a slow incline, I think, as we return to the set.”