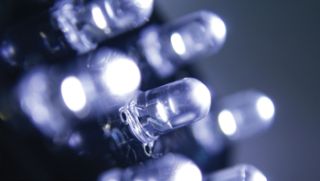 SEATTLE: With dozens of LED lighting vendors crowding the NAB Show exhibit halls a few months ago, LED technology has proven to be more than just a passing fad for television and motion picture applications.

There are certain provable advantages to LED lights. Their raw efficiency is 10 or more times that of tungsten fixtures. That efficiency means they throw off a small fraction of the heat of legacy lighting fixtures. Without needing heat resistant housings and lensing, LED lighting fixtures can be made more lightweight and compact than their predecessors. They can dim with no noticeable change in color temperature, and require no bulky external ballast modules.

But in the background, there have been questions raised as to the color rendering on film and video cameras shooting scenes lit with LED fixtures. While the big deuterium fusion (aka “the sun”) light source and tungsten halogen emitted light each provide a wide and fully variable spectrum of light, the spectrum of light from LED technology tends to be spiky.

BLUE LIGHT
For certain lighting applications, a blend of different colored LED lamps can be mixed together to provide a spectral range that is closer, but not identical, to true daylight or tungsten light sources. But for applications where single white LEDs must be used, the colors must be provided by different phosphors coating the LEDs.

Here’s a quick description of how white LEDs work. (Not intended as a doctoral dissertation.): The LED (light emitting diode) in a white LED actually emits blue light, but various phosphors applied in a coating over the LED itself emit different colors of light. The exact makeup of that phosphor layer is the “secret sauce” of color rendering in LED lighting.

If you turn back the clock 30 years or so, you could substitute fluorescent technology for LED technology, and the script would be about the same. Gary Thomas, national sales manager for El Monte, Calif.- based Videssence, one of the fluorescent lighting for television pioneers, remembers those early days.

“When we first brought our product to the video industry, color rendering wasn’t that great,” Thomas said. “The lamp manufacturers really weren’t up to speed for video. They made fluorescent tubes for the architectural industry, and color rendering wasn’t that mandatory. Once they found that there was a market for fluorescent lamps in the video world, then they started to be sensitized to the need for tubes that gave off proper color temperature.

“I think that now that LEDs have been around for a while, it’s the same thing.”

Several companies that market LED fixtures for ENG applications told TV Technology that for their customers, color rendering of portable ENG fixtures is important but so are factors of raw lumen output, portability, fast setup, power consumption and ruggedness.

An ENG shooter called out to a capture an “on the run” interview, a fire or other fast breaking story must be able to illuminate as much of the location as possible, while using up as little battery power as possible and still get high quality true color. And their customers report that their portable LED ENG lights do seem to match up well with the plethora of various sources of ambient light they’re called on to shoot in.

“Our product stays the same in the sense that we make high output, soft, color correct and controllable lighting systems for the very highest and discerning of cinematographers and gaffers and lighting designers who are doing cinema and television production.”

MAINTAINING PHOSPHOR INTEGRITY
Ali Ahmadi, product manager for the company that pioneered LED lighting for the professional film and video market, Litepanels, said that in addition to coming up with the correct phosphor mix for a white LED, there’s also a culling process after the LEDs are manufactured.

“There’s product we accept, and product we reject,” he said. Such selectivity means quality-minded LED light fixture manufacturers pay a premium for LEDs that meet their specifications.

Ahmadi pointed to another critical factor: keeping the LED and phosphor layer healthy through the expected life of the LEDs by not over-driving the LEDs themselves. “The phosphor is spec-ed to a certain maximum operating temperature,” he said. “If that temperature is exceeded, the phosphor will degrade, resulting in a change of color temperature and a change in spectral makeup of the light output.” Additionally, he said over-driven LEDs will begin to decrease in intensity before reaching their life expectancy.

While there’s a misnomer that all LEDs are the same, Litepanels and Kino Flo have developed their own LED designs for manufacturing, and Videssence and AAdynTech use a video-optimized LED design by CREE, a 25 year-old Durham, N.C.-based provider of LED lighting.

“There are new versions from CREE that are much, much improved over anything that has been used before,” said Walter Lefler, partner in AAdynTech. “We’re getting 98 percent of the light from those CREE LEDs going to our proprietary lensing.”

If you want to start a fight among LED fixture manufacturers and lighting people in general, bring up CRI (color rending index) ratings. Without wading into that issue, which could fill books, it’s worth noting that the Academy of Motion Picture Arts and Sciences has undertaken a Solid State Lighting project to fulfill what the Academy’s Web site deems a “need for an unbiased investigation of solid state lighting (SSL) technologies, which includes LED emitters, for motion picture production.”