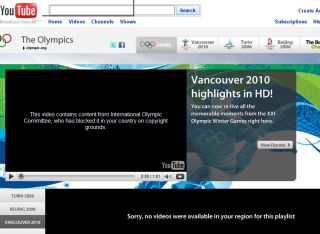 “Our mission is to make broadcast footage of the Olympic Games available to the widest possible audience,” said the IOC’s Mark Adams. “The Vancouver 2010 Olympic Winter Games was an important moment in Olympic history in terms of online and mobile phone broadcast, and we want to ensure that people have the opportunity to re-live the magic of the Games either through our freely available digital channel or through our rights-holding broadcast partners’ platforms.”

Magic or otherwise, however, www.youtube.com/olympic is not available in the United States, where NBC has the rights to content from the Games. Highlight clips here are at www.NBCOlympics.comand www.UniversalSports.com.

Elsewhere, the highlights will load on the YouTube channel.

“Vancouver 2010 was the first Olympic Winter Games to have digital media coverage freely available across the world, provided by the rights-holding broadcasters. The IOC, and its wholly owned subsidiary, Olympic Broadcast Services, will now make over 400 highlight clips available of the Vancouver 2010 Olympic Winter Games, as well as footage of previous Olympic Games,” the IOC said.

The IOC’s collaboration with Google’s YouTube began with the 2008 Beijing Olympics, “when delayed highlights were made available in territories where digital video-on-demand rights had not been sold.

“This marked the first time that the IOC had produced and delivered footage to Olympic fans directly. The channel received over 21 million video views during the period of the Games.”

The IOC said its agreement with Google/YouTube includes “protection against ambush on all Google platforms, as well as promotion of Olympic content and online initiatives. It is non-commercial and non-exclusive. All broadcaster rights are fully respected, with the IOC retaining full ownership and control over its content.”