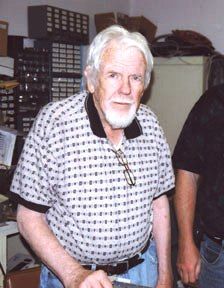 Charles (Charlie) E. Anderson, a member of the six-person Ampex team who developed the first successful video recorder, died on July 12 after suffering a stroke at a nursing care facility in Sparks, Nevada. Anderson had been hospitalized since March and was the subject of an April TV Technology editorial. He was 88 years old.

Anderson is remembered for many accomplishments in the field of broadcasting, with the chief among being his work at Ampex in the design of the world’s first successful videotape recorder.

Ampex, a company that gained worldwide reputation in the post-WWII years for producing high quality audio tape recorders decided in the early 1950s to try its hand in producing a machine that could equally well store television images on tape. Ampex was not alone in this endeavor—RCA, the BBC, and Bing Crosby Enterprises were also major players in VTR R&D then. For a time, the Ampex VTR initiative lagged behind those of its competitors, primarily due to funding problems. This changed in 1954 when the effort was given priority and Charles Ginsburg was selected as team leader. Ginsburg recruited five others from the Ampex operation to join him in a rebirth of the VTR project. Anderson, Fred Pfost, Shelby Henderson, Alex Maxey, and Ray Dolby were chosen to work with Ginsburg in attempting to do what many engineering professionals considered impossible—the recording of broadcast-quality video on magnetic tape.

The Ampex group deviated from the other VTR developers by using a rotating multi-head head assembly for achieving the necessary head-to-tape "writing" speed and was initially beset with problems in maintaining equal levels from the multiple tracks being laid down and reproduced. Anderson was tasked by Ginsburg to develop automatic gain control (AGC) circuitry to ensure equal levels in the segmented video tracks. However, this proved more difficult than initially believed. Ginsburg recalled that in late 1954 the AGC system was not up to the task and this appeared to be a major stumbling block in producing satisfactory images.

Anderson, who had worked in some early FM broadcasting operations before joining Ampex, believed that the level disparities could be solved by dumping the amplitude-modulated recording technique being used and replacing with an FM system.

Frequency modulation was not looked upon favorably by Ginsburg initially, as what Anderson proposed ran somewhat counter to what was known about FM at the time—it would require the upper modulating frequency and the carrier frequency to be very close together, due to the limited bandwidth provided by the early tape heads and magnetic tape.

According to Ginsburg, Anderson "worked with a vengeance" in making this non-traditional FM concept work. He ultimately succeeded and provided a crucial step in taking magnetic recording of video signals from a concept to a practical entity.

Anderson spent the majority of his career at Ampex, eventually moving from engineering to marketing. He retired in June 1984—recalling in a 2006 interview:

"Three things transpired that made me take retirement—I had 30 years [of service], I’d paid off my house, and the other I can’t recall."

Anderson did not stay retired, first working as a consultant, and eventually taking on part-time maintenance engineering duties in 2000 at KNPB, the PBS member station, in Reno, Nevada. He retired from KNPB on Feb. 18, 2009, the day after the originally scheduled 2009 U.S. analog television shutoff.

In 2005, Anderson and the other surviving members of the Ampex VTR team received the National Television Academy’s Emmy Award for Technology and Engineering.

Funeral and/or memorial service plans had not been announced at the time of this posting.