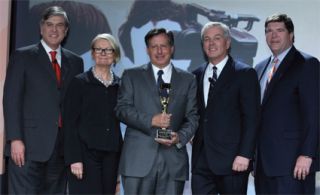 (L-R) NAB President Gordon Smith; NAB Hall of Famers Marcy Carsey and Tom Werner; NAB TV Board President Paul Karpowicz; NAB Joint Board Chairman Steve Newberry
Carsey Werner Company, a virtual juggernaut of successful sitcoms over the past three decades, became the newest member of the NAB Broadcasting Hall of Fame at the 2011 NAB Show's Television Luncheon—with the strong endorsement of another household name in television entertainment, and a surprise call-in from one of America's most beloved comedians.

Hosting the festivities in a jammed Hilton ballroom to honor show creators Marcy Carsey and Tom Werner was Mary Hart, longtime host of "Entertainment Tonight," whose own local broadcast career prior to her co-hosting "ET" included jobs in hometown Sioux Falls, S.D., followed by stints in Iowa and Oklahoma.

"I was always in my career drawn to broadcast television, which I've always found wonderful and rewarding," Hart said, after being introduced by NAB President and CEO Gordon Smith.

'THEY HAPPEN TO BE PERFECT'

Carsey and Werner, following a few years at then-struggling ABC Television (where Werner said "if they had put the Vietnam War on ABC, it would have been cancelled in 13 weeks") both decided to strike out on their own in 1981.

And they struck big—producing such sitcom classics as "The Cosby Show," "Roseanne," "Cybill" and "That '70s Show," among others. The duo's sitcoms have garnered no fewer than 20 Emmys and 10 Golden Globes so far, and are seen in 175 countries.

Mary Hart "Marcy and Tom are my friends and partners, but as far as human beings go, they happen to be perfect," proclaimed Bill Cosby in a live phone hook-up for the luncheon. "With them, it was always 'first cabin,'" he said, following a video presentation of scenes from his, and other, successful Carsey-Werner programs. (Little-known factum: Tom Werner is also chairman of the Boston Red Sox.)

On the consent item, he said, "It's fair, it's working and it benefits viewers." He urged stations to oppose any effort to undermine the industry's progress on the issue. Karpowicz also talked up the current rollout of Mobile DTV—noting a new projection that virtually all TV households in the continental United States will have access to Mobile DTV services by early 2012.

Also announced at the Television Luncheon—and detailed by NAB Television Executive Vice President Marcellus Alexander—was word of an industry-wide "Flash Workout" to commence at exactly 1:42 p.m. EDT on May 3 throughout the country. (A so-called "flash mob" is a group of people, usually total strangers, who join in a pre-announced dance, stand motionless or perform some other public display in unison, over a short duration.)

The public-service event is being conducted in conjunction with First Lady Michelle Obama's eat-healthy-and-exercise campaign for kids. One or more "official" radio and TV participants are being sought in each DMA, as well as at least one official middle school sponsor.

Beyoncé agreed to help promote and participate in the May 3 event, and dedicated a song ("Move Your Body") for the cause.

The luncheon was sponsored by WideOrbit. © 2011 NAB