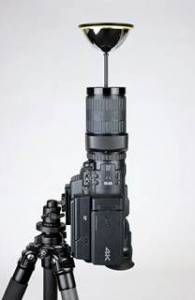 The JVC GY-HMQ10 4K compact handheld camera, equipped with a GoPano Plus lens attachment, was used to shoot the 360-degree video for “She’s So Mean,” the new single from Matchbox Twenty’s upcoming Emblem/Atlantic Records album, North. The video places the viewer in the center of a large room while the four members of the band perform around them on all sides. Viewers can control the direction of the camera by dragging the video left, right, up, or down, resulting in a captivating interactive experience.

The music video was shot and edited in July by Los Angeles-based TIC360, a division of The Integration Company. GoPano's 360-degree video technology was originally designed for the military and aviation industry. However, the company has expanded its footprint, making 360-degree video available in the consumer space with products like the  GoPano Plusand the GoPano micro.

GoPano Plus uses a patented, specially curved mirror, which gathers light from all directions and reflects it into the lens of the camera. The “donut-shaped” video then shows everything in a 360-degree ring around the unit. On a computer or mobile device, the image is processed using patented software into an interactive scene, where the view is controlled by the viewer. TIC360 used GoPano’s proprietary VideoWarp Director Mac-based software to import the 4K video from JVC’s Clip Manager software, and then created a single, 360-degree Apple ProRes file for editing in Final Cut Pro.

The 360-degree video of “She’s So Mean” can be viewed here, or it can be viewed with the free downloadable “GoPano” app found in the iTunes Store, http://itunes.apple.com/us/app/gopano/id459463884?mt=8.