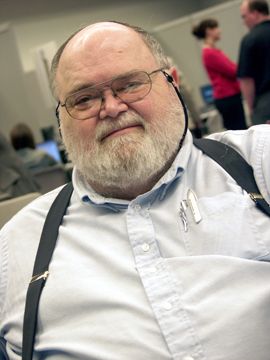 Larry Bloomfield, founder of the popular “Taste of NAB Roadshow” and a radio/TV engineer and educator died of a heart attack Nov. 8 in Eugene, Ore. He was 72.

A native of Southern California, Larry served in the Navy for 16 years. After leaving the service, he joined CBS’s Channel 2 in Los Angeles and spent his career with a variety of broadcast outlets. He also owned a three-tower AM station in Southern California. He also taught for six years in California and three years in Guam. Larry was a SMPTE and SBE member as well as a member of the Central Oregon Coast Amateur Radio Club, according to Barry Mishkind of The Broadcasters Desktop Resource.

In 2002, Larry launched the “Taste of NAB Roadshow,” a traveling show that ran from May through September and provided a review of notable products introduced at the spring broadcast show (the revue was not affiliated with The NAB Show). Larry and his staff traveled to more than 143,000 miles and made presentations to more than 11,000 attendees over the past 8 years.

Larry is survived by his wife Carollee and two sons, Larry and Tom. Funeral services for Larry will be held Sunday, Nov. 14 at the Burns Funeral Home in Florence, Ore.