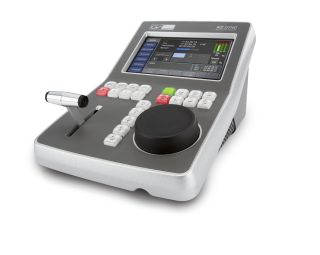 LAS VEGAS: Grass ballyhooed several new products for the 2011 NAB Show at its Saturday afternoon presser at the MGM Grand where Wi-Fi was an unbelievable $100 per computer:

Stratus is a modular “media workflow application suite,” illustrated below at right, built on a service-oriented architecture that supports a K2 network. Proxy streaming has been implemented within the server.

3G Transmission, below left, is Grass’s third-generation camera transmission system, capable of carrying 3 Gbs signals over triax and fiber, extending the range of triax by 25 percent “to a conservative minimum of 4,921 feet .” 3G triax is available now; 3G Fiber will be in mid-May. Pricing will depend on configuration.

The four new ADVC G-Series converters, below right, are now shipping. They offer frame sync, 3D stereoscopic signal conversion, and 1080p capability with 3Gbs SDI. All are 1/3 RU. The G1, G2, and G3 will retail for less than $1,200. The G4 will retail for under less than $700.

The ADVC G2 is an SDI & HDMI-to-analog and SDI multifunctional converter/downscalar with audio outputs for de-embedding audio. The ADVC G3 is a twin-SDI-to-HDMI 1.4 converter with a second SDI input that can be used for second-eye input to support 3D. It will multiplex two signals for a 3D output via HDMI.

The ADVC G4 is a sync generator with a reference input and nine outputs that can be controlled in threes. It has a 48 kHz word-clock enabling it to be combined with other ADVC G4 units.

New and upgraded software is available for Grass’s Jupiter and Encore router control systems that provide faster processing and more flexibility for the company’s Trinix NXT, Concerto, Apex, and Acappella routing switchers, including full support of the Trinix NXT Multiviewer. Existing customers can download the Encore upgrade at the Grass Valley support website.

Grass is releasing v8.0 of its K2 Summit Production Client, which supports simultaneous high- and low-resolution clip generation directly on the server during ingest and recording, along with the ability to stream those files as they are being ingested. It’s schedule for a July release; price depends on configuration.

The Maestro Master Control and Channel Branding System, right, gets a new software option for generating Emergency Alert System text crawls in HD or SD, due out in the second quarter.

MediaEdge -SWT4 for Mac streaming video software client functions as a web browser plug-in for Mac computers connected to a MediaEdge IP video network. The MediaEdge trio of products start shipping this month. Pricing ranges from $399 to $5,499 depending upon product and configuration.

The Trinix NXT video routers are getting new I/O boards that extend signal reach to more than 31 miles via fiber. They’re due in 3Q. They’ll also get a Multiviewer monitoring capability due in 3Q.