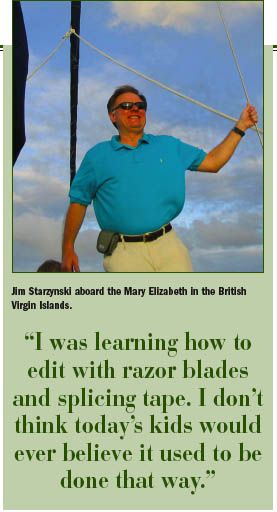 Jim Starzynski aboard the Mary Elizabeth in the British Virgin Islands.Jim Starzynski today won the ATSC's Bernard J. Lechner Award. This profile of Starzynski is from Television Broadcast, November 2008: Something about sound on the Jersey Shore attracts serious attention. One day, Bruce Springsteen's a club crawler there, then boom! He's "The Boss." The same goes for Jim Starzynski, who was a tech manager for the Asbury Park Press when one of the largest TV stations in the country poached him.

"I stepped out of Asbury Park one day right onto 5th Ave., doing a shoot with WNBC's Mary Civello at the Plaza Hotel," Starzynski said. "It was like, 'holy smoke,' but I got it. I had been in audio and media for 10 years. The thing you find out quickly is what you already understand."

Today, Starzynski is principal engineer and audio architect for NBC Universal. What he understood very early was that he had a knack for sound.

"I was always interested in audio and electronics... since I was about 11 or 12 when my brother finished his tour with the Air Force and came home from overseas with the first Pioneer stereo receiver I had ever seen," he said. "I was fascinated."

THE "STAR" IS BORN

Other than those early sound savant tendencies, Starzynski was a regular kid growing up in South Amboy, N.J., where he was nicknamed "Star" at Catholic school.

His dad, a truck driver, once flew bombing missions over Europe in WWII. His mom was a housewife and a part-time banquet waitress. Starzynski fished, hung out with friends, delivered newspapers for $12 a week.

"I worked as a porter with many of my friends and classmates at St. Mary's High, too," he said.

"That means 'janitor," he said. "I did that through my junior and senior year."

Starzynski took on a second gig during his junior year.

"Lafayette Radio asked me if I would like to work as a part-time electronics/CB/audio salesman at the East Brunswick store. I could not say yes quick enough; one set of working papers in hand and my career was officially launched."

A high school guidance counselor steered Star to a community college that taught audio, "which was very unusual at the time," he said. "Schools with media and audio were new in the '70s."

"I was learning how to edit with razor blades and splicing tape," he said. "I don't think today's kids would ever believe it used to be done that way."

"I worked for a couple years after that in a different, local, hi-fi shop, and was hired by Brookdale College, first as a media 'learning assistant' and eventually as an adjunct audio instructor at age 23, just after receiving my Bachelor's degree from Jersey City State.

"I did this for five years until the Asbury Park Press newspaper hired me as the tech manager for their start-up video production department. I scheduled and managed crews, edited, TD'd and mixed audio for them for one year until WNBC-TV gave me a spin as an audio tech and cameraman for News 4 NY for 13 months. I used that as a springboard into NBC network project engineering where I designed audio systems for 14 years and was promoted to principal engineer in 1999, the position I hold now."

It's a position that's allowed Starzynski to help design audio for digital television, including the biggest broadcast audio project of all time—the 2008 Summer Olympics, all in surround sound. And it all started on the Jersey Shore. ~ Deborah D. McAdams